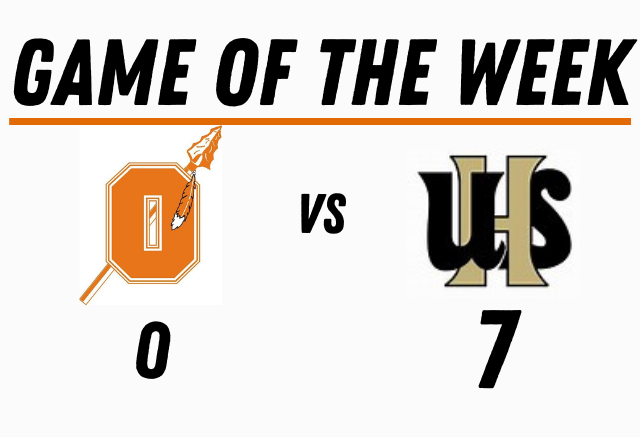 The Upperman Bees battled their way to a 7-0 win over Oneida on Friday night in Baxter in the High School Football Game of the Week.

UHS head coach Adam Caine said it was an ugly first half, but he was pleased with how his team responded in the final two quarters as they handed Oneida (4-1) its first loss of the season.

“That was the worst first half of football that I’ve seen as the Upperman High School head coach,” said Caine. “I’m sure that Oneida had a lot to do with that, but I was just very offended by the way we came out and played early… but at the same time… I’ve never been more angry at a group and more proud of a group. (Oneida) was a good football team and we found a way and hung on and battled as a team. I don’t know that we did everything right, but I think we were trying to. I’m proud to be their coach.”

The first half was marred by missed opportunities and turnovers. The Bees recovered a fumbled snap on the first OHS offensive drive of the game but were unable to capitalize after getting the ball to the nine-yard-line.

Each team boasts strong defenses, and they ruled the game as neither team could break through and score in the opening half.

The second half saw less miscues, but strong defensive performances took the scoreless tie into the fourth quarter.

UHS junior Ty Dutchess then orchestrated a drive, marching down the field on the ground before breaking the tie with a seven-yard touchdown rush with 3:27 remaining in the game. JT Daniels made the extra-point in his first varsity game to give the Bees a 7-0 lead.

Daniel Metzgar then recovered an OHS fumble to put the game away.

Dutchess bounced back from earlier turnovers with the touchdown drive when the Bees needed it.

“What a drive,” said Caine. “I know Ty struggled and had some fumble problems, but what a… drive he put us on that last one. I told him I’m proud.”

The game was a contrast to a similar game the Bees played in week four. In that contest they were defeated 21-14 by Livingston Academy in a game that was also a physical matchup. Caine said the win shows growth in his team.

“I think it does (show growth),” said Caine. “I told the team earlier this week that I think Oneida is a lot like Livingston in terms of the way they play the game. They’re very rugged up front and hard to run against. That creates issues for us, especially on a wet field. I think at the end of the day we found out who we were and what we were trying to do.”

Dutchess led the way on the offensive stat sheet, rushing for 157 yards and a touchdown on 19 carries. Thomas Ensor went 7-10 through the air for 67 yards. Terrance Dedmon added 33 yards rushing on nine carries and 29 receiving yards on two catches.

Defensively, the Bees have shifted some personnel in recent weeks. Most notably, Jyron McClellan and Terrance Dedmon were moved to two of the linebacker spots. The move payed off Friday when McCllelan tallied eight tackles and 2.5 tackles for loss. Dedmon added four tackles and two tackles for loss.

“The two of them bring (aggressiveness) to the equation,” said Caine. “They’re trying to get to the football. Even when they mess up, I think that aggressiveness has made us better. We’ll continue to improve, but I think when we watch the film, they made some plays to help us out there.”

The UHS defense largely slowed down star OHS tailback Kolby Morgan. The division 1 football prospect still rushed for 126 yards, but on 27 carries for an average of 4.7 yards per carry.