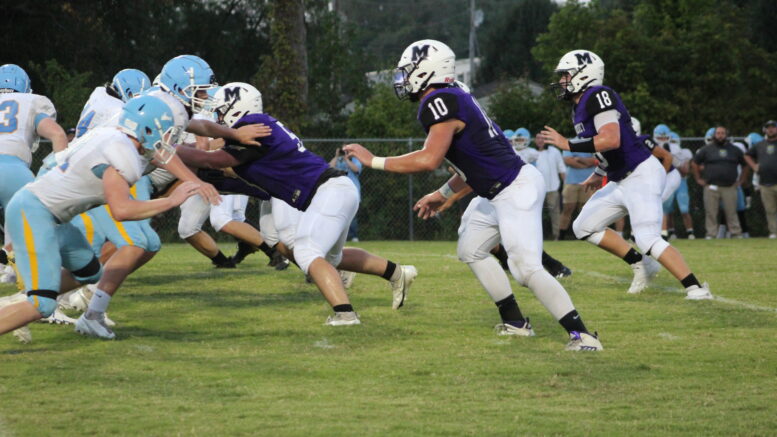 The Monterey Wildcats came out flat in their 20-13 loss to Oneida on Friday, putting themselves in a logjam atop the Region 2AA standings.

It wrapped up Oneida’s region schedule, while the Wildcats and Rockwood each have one more region game on their schedules before the seeding for the playoffs will be finalized.

As far as what happened against the Indians in week nine, head coach Scott Hughes believes it just came down to which team was more prepared to play.

“We weren’t mentally prepared,” Hughes said. “We had some lack of focus. No excuse to it, Oneida out-played us…we had opportunities. We just didn’t take advantage of the opportunities given to us, and it wasn’t in the cards for us to win that football game.”

The hope is that the way Oneida came out and played with energy serves as a wake-up call for Hughes’ team. There’s no easy outs this time of the year, and no team should approach any game as such.

“You’re at the point in the year where you have to bond together, grow and move forward, or lay down and the season goes down the drain,” Hughes said. “This team has the makeup to go be successful, but it’s going to depend on their mindset on whether they accept the challenge or not.”

Make no mistake. It’s no surprise whatsoever to Hughes that this region is going down to the wire to decide.

“You have very talented football teams that are all a little different,” Hughes said. “It’s one of those things that one night can slip up and bite you in the hind end. For us unfortunately, our worst night of the year was probably in the biggest spot of the year.”

This week brings the challenge of Bledsoe County, another 2A team. They run the Wing-T primarily, and Hughes knows his guys will have their hands full with another physical team.

“They’re going to line up and mash your face and laugh about it while they do it,” Hughes said. “They’ve got a preseason All-State running back in Cadillac Siever. Gunner Sweatt is another back they have that’s a big, physical, fast young man…we’ve seen both of them the last two years, and we know what we’re getting into.”

Discipline is always important in any football game, but against the Wing-T, Hughes reiterates that it’ll be one of the biggest keys to victory for the Wildcats.

“You can’t even come close to talking about how important that is,” Hughes said. “You don’t ever seen them miss a double-team or a back block…Their backs on so disciplined in their cuts. They do just a phenomenal job of pressing the heels of the lineman and setting up their cuts. It’s a challenge that we have to accept that we have to be good every snap.”

The two teams meet on Friday at 7 P.M. The game will be live-streamed on Upper Cumberland Reporter 2 on Facebook.