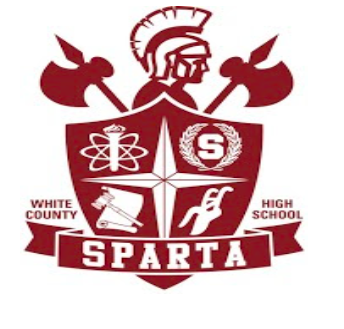 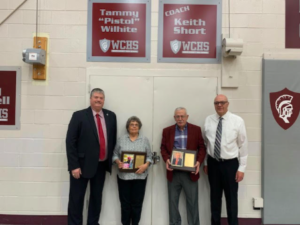 Friday night, the date of February 11th, became a special day to remember for two White County families. The Wilhite and Short families will hold this day dear for many years to come as the names of Tammy “Pistol” Wilhite, and Keith Short were revealed on the wall of Roy Sewell gymnasium. Both individuals were selected by the Hall of Fame committee as the two newest selections into the White County High School Hall of Fame. Wilhite was selected in the contributor category and Short as a coach.

Both Wilhite and Short are WCHS graduates. If you combined their years of attending White County High School, teaching, coaching, playing, and covering White County sports, you would have over 50 years of service to the citizens of White County. Short, who also coached “Pistol” when she wore the maroon and gray, the night was exceptional. Wilhite’s mother, Mrs. Jewel Wilhite Smith, represented her in the ceremonies.

Wilhite, who passed away in 2016, was a Warriorette basketball player, student, and Sports Editor for the Sparta Expositor covering WCHS athletics. Short was a track/cross country runner, student, and Coach for multiple sports at WCHS. Short coached the Warriorettes basketball program for 14 years; congratulations to the Wilhite family on Pistol’s induction and Coach Short and his family on becoming the newest members of the White County High School Hall of Fame.