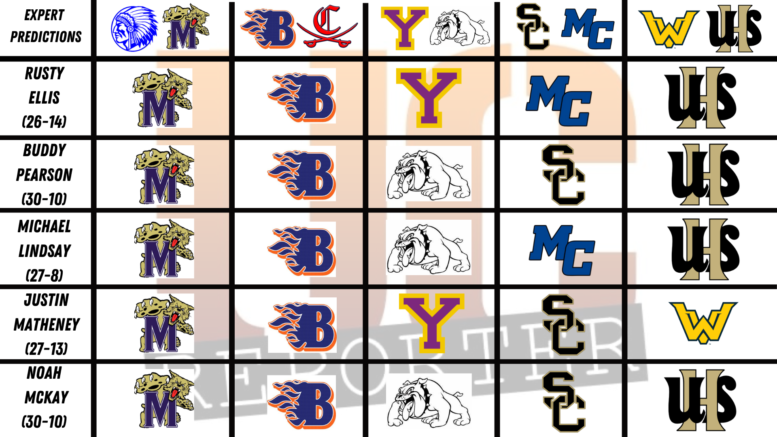 Comments:  Blackman’s defense will give Cookeville chances at first, but the Cavs will need a really bad game by the blaze to come out of here with a win.

Comments: No comment for the sake of saying something I shouldn’t.

Comments: This could be a playoff preview for Cookeville, and despite the fact that I like Mace Thomsen’s chances to get things done in the passing game with the CHS receivers, I ultimately think they Blaze red-hot offense will be too much to handle.

Comments: Upperman gets a complete performance on both sides of the ball, and I foresee a big game from Terrance Dedmon incoming. Give me the Bees

Comments: Here are some of the hard picks. Jaxon Rollins being out for the year is a huge blow for this Bee offense. More of the workload will fall on the shoulders of Jonathon Rushing and the legs of Terrance Dedmon. Upperman may have to work out some kinks on the offensive side of the ball. Hopefully they are able to get it figured out to make a solid playoff run.

Comments: The Bees should cruise to an easy non-region win Friday despite the loss of Jaxson Rollins. Walker Valley likes to spread the ball out and throw, but Upperman’s defense is up to the task and should shut down the Mustangs.

Comments: The loss of Rollins is significant, but it also means I expect to see a heavy dose of Terrance Dedmon on Friday night. Walker Valley’s offense is fun to watch, but I like Jaxson Bush and Branson Turnbow’s chances on the outside to make some plays as the UHS defense carries them to a big road win.

Comments:  Good lord this one is difficult. I love a lot of what Smith County has done so far this year and I’m intrigued to see how far they’ve come when they battle East Nashville. As far as this one’s concerned, I’m going to go with Macon County because of how dangerous Gabe Borders is every time he touches the ball. It would not surprise me in the slightest if the Owls won.

Comments:  Both teams are equally physical. Smith County is bigger and Macon County looks to have more team speed. The Owls will look to  find a way to make someone other than Gabe Borders beat them. IF they can do that, look for Smith County to win a slug fest in Carthage.

Comments: Toss a coin on this one as two of the area’s best face off in a thrilling non-region showdown. Macon County has had a week off after their thrilling win over Stone Memorial and should get a massive game out of Gabe Borders. Smith County is more than capable of taking the victory in this one as well. He who wins the line of scrimmage wins the game.

Comments: What a matchup. This should be a dandy in Carthage. It could go either way, but Macon County struggled against Upperman’s power running, and Smith County runs a similar scheme with some giants up front. I’ll have a slight lean towards the home team, but this is a big one for Macon County as the overall record could loom large with tiebreakers.

Comments: And we follow that up with a game that’s equally as hard to pick. I would love to go with the Bulldogs here but I just think the York depth will be a bit too much for them. A close loss isn’t the end of the world in Celina, especially considering they’re playing up a class. Any team coached by Bruce Lamb has a shot in this game.

Comments: For me this is the hardest pick of the night. Literally a pick’em. I can make an argument for either team to win. Even though York has a worse record I do believe the Dragons have played a tougher schedule and I’ve seen them play their best game of the year in person. Which is why I’m rolling with York here.

Comments: A battle of two physical teams should see the Clay County Bulldogs pull out an impressive non-region victory. York has the athletes to make it a game, but I think Clay is too much up front.

Comments: Another coin-flip game here. The Bulldogs are a point away from being undefeated, and while the Dragons have faced a tougher schedule, I’ll follow my gut and say the Bulldogs earn a hard-fought win at home. If it was in Jamestown this pick may be different.

Comments: Monterey is rolling right now and playing some of their best ball of the year at the right time. Mason Bowman is a bonafide Mr. Football candidate and Matthew Montgomery is starting to really pick it up in the passing game. I see two Bowman TDs and one each from Eli Saylors and Michael Allred and the Wildcats continue their excellent play.

Comments: Changing my pick from the Coaches Show on Tuesday. I just feel good about the Wildcats right now. Monterey’s playing great ball as we approach the most important time of the year. This game taking place on the mountain tips the scale here for me. Keys to a Wildcat win rest with the big four seniors Montgomery, Bowman, Allred and Saylors.

Comments: Another coin-flip game as Monterey faces a solid Bledsoe team. Mason Bowman is good enough to make the difference; I’ll take the team he’s on.

Comments: This game feels tighter than the unanimous picks would say. Monterey appears to have found their rhythm as winners of four in a row including a dominant performance over Oneida. Bledsoe County has faced a tough schedule, but have been more inconsistent. I’ll take Mason Bowman and the Wildcats.