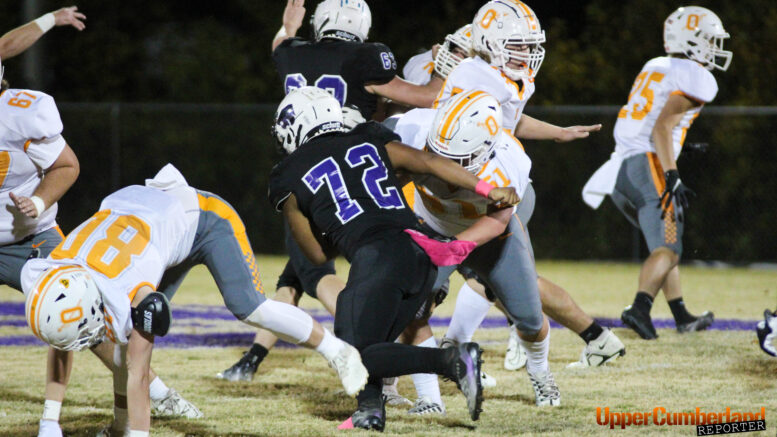 by Rusty Ellis and Michael Lindsay

With the regular season winding down in Tennessee, playoff races are beginning to take shape with the postseason on the horizon.

Here is everything you need to know about every playoff race in the Upper Cumberland heading into Week 11:

As things currently stand, this region is relatively simple. Stone Memorial can clinch the top seed in the region with a victory over DeKalb on Friday. If the Tigers win however, Stone Memorial falls to the fourth seed and DeKalb moves up to the three seed. The second scenario would see Upperman finish first in the region, with Macon coming in second.

If Stone wins on Friday, Upperman finishes in second as long as they defeat Livingston Academy. Macon would then finish third and DeKalb would finish in fourth.

Monterey enters the final week of the season with a shot at potentially claiming first in the region and securing home-field advantage for the next few weeks. It’s relatively simple though it does require some help: Monterey needs to beat Wartburg and they need Rockwood to beat York. This would cause York to fall down to third place in the region and would shift Rockwood and Monterey up a spot each.

A York win would secure them the top spot in the region, meaning that a Monterey win would still give them the two-seed and a home playoff game for the first round at least.

This comes as no surprise to Scott Hughes, as it’s a very similar situation to what his team faced last season.

“I told them when we joined this region that it was going to take our best game every night,” Hughes said. “You’ve got some tradition-rich programs and communities, and if you slip up, you’re going to get beat. That’s the best part about our region, and it doesn’t matter who’s playing.”

One thing Hughes has emphasized to his guys is that while it may be easy to scoreboard-watch, all they can control is whether or not they handle their business on Friday against Wartburg.

“We are only in control of ourselves,” Hughes said. “The other football game that takes place in our region, it does impact us, but we have no impact on that game…we have an opportunity to control  what we can control, so we have to only worry about us.”

Current Standings (based on CoachT)

This region is where things start to get muddy. White County currently sits in third place heading into their regular season finale on Thursday against Sequatchie County. They need to win for any total wins and points tiebreakers, and they’ll need additional help to move up in the standings.

If Green Hill loses to Mt. Juliet, White County becomes the second seed with a win. If Wilson Central beats Hillsboro, Green Hill wins and Sparta loses however, White County will find themselves in the fourth seed, meaning they’ll play the top seed from Region 6.

Much like Monterey, White County is in a position where they need to focus on themselves first despite the fact that they’ll need some help.

“It’s a good problem to have, we know we’re in the playoffs,” Fraiser said. “Where we fall is not up to us, so we just have to go out and play hard against Sequatchie this week…hopefully we get to host, but if not, we’ll load up the bus and go where we need to go.”

The big difference for White County is that they play on Thursday, meaning they won’t have a game to worry about when Wilson Central, Green Hill and Mt. Juliet are playing. When asked what he’ll do Friday night, Fraiser kept it simple.

“We’ll give them the day off on Friday,” Fraiser said. “The kids are planning on doing something, I’m planning on going and watching Franklin County and Nolensville, so we’ll go watch the game as far as coaches are concerned…we’ll give the players the day off to get healthy and get ready to go for next week.”

Cookeville’s scenarios are actually as simple as can be: beat Shelbyville on Friday and you’re the three-seed that gets to go play at Blackman. Lose, and you’re the four-seed who gets to play at Oakland.

Clay County takes on the Gordonsville Tigers this Friday and once again, it’s pretty simple. Win and you’re the region champion with home-field advantage for a few weeks. Lose and you’re still the second seed with a home playoff game, but from there your path is unclear.

Smith County takes on East Nashville in Carthage this week for the region championship game, a matchup that should also serve as a solid measuring stick game for the Owls. A year ago, this game was a 36-0 win for East Nashville, though it was also going up against an injured Owls squad.

As for Jackson County, they take on Stratford in a win-and-in game. As simple as it can be, the winner goes on to the playoffs, and the loser’s season is over. Last year, the Blue Devils won a close 6-2 matchup in Gainesboro, so to earn a playoff spot this season, they’ll have to do it on the road in Nashville.

Coverage of Clay-Gordonsville and East Nashville-Smith County can be found on uppercumberlandreporter.com following the games.