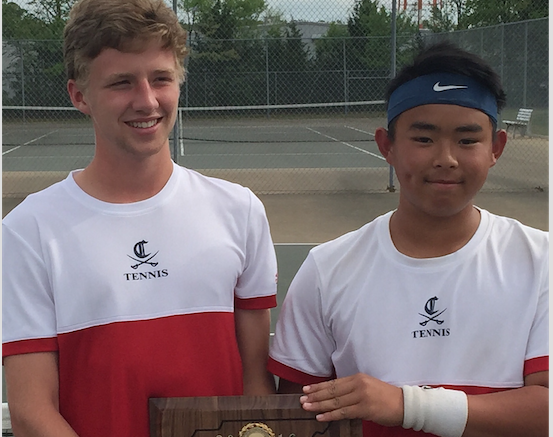 With a win in the Region 3-AAA Doubles final Monday at the Cavalier Courts, Jacob McCarter and Marlon Ngo advanced to the state tournament.

In a rematch of the District 6-AAA final, McCarter and Ngo again outlasted teammates Jake Ward and Tanner Cagle.  This time it was McCarter and Ngo who jumped out to the quick start, claiming the first set 6-2.

When they took a 3-0 lead in the second set, they seemed to be in complete control.  However, Ward and Cagle rattled off 5 straight games and won the second set.

In the third set, Ward and Cagle grabbed a 3-1 lead.  But McCarter and Ngo won five straight of their own to end the match.

The Cavaliers will play Siegel in the Sectional match scheduled for Friday at 2:00 p.m. at Old Fort Park in Murfreesboro.  If weather is a factor, the match could be moved to Thursday.

McCarter and Ngo will play in the individual state tournament beginning May 26 at Old Fort Park.