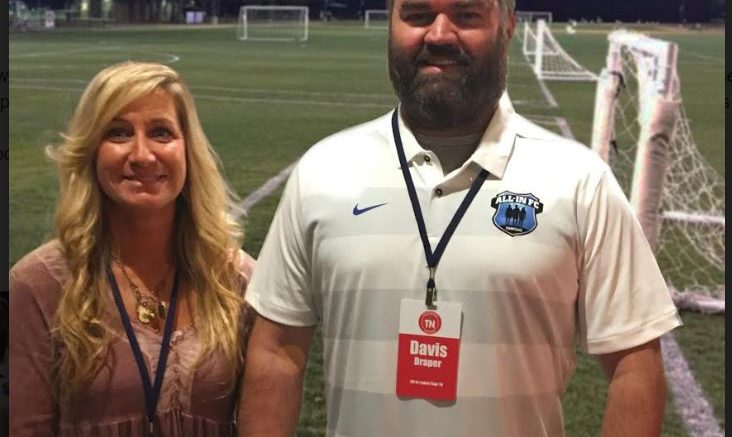 Coach Draper, who started All-In Futbol Club TN in 2017, has a long history with youth soccer and runs a highly successful, competitive travel program in the Cookeville area and surrounding counties. All-In Futbol Club is a soccer club for boys and girls from age 6-18 with over 200 players. Draper holds his USSF National B License and is currently working on his USSF National A License. Davis trained at the Vogelsinger Soccer Academy in California and played in the TN Olympic Development Program in his youth and also holds a NSCAA Director of Coaching Diploma. He also coaches several Select & Academy teams at All-in.

“We are very excited about having Davis Draper coming in as Director of Coaching for our Rec Soccer program,” says Angie Spitler, President of CRYSA “He brings very impressive credentials and results from players he has trained and coached. This is literally a game- changer for our players in Crossville, especially for the players who would like to go on to play competitive soccer as they get older.”

The partnership with CRYSA and All-In Futbol Club TN will encourage growth to our already successful Rec program and increase player development at early ages through fun opportunities for play.

“Davis has a way of teaching soccer skills to youth and making it fun,” says Mark Mackain, All-In Futbol Club Executive Director. “With what he has done to change the soccer culture in Cookeville, I have no doubt his leadership is going to make a great impact on CRYSA and its players for years to come.”

As with All-In, the focus will be on coach and player development. Rec soccer should be about having fun, but we also want the kids to learn technical skills that will allow them to progress from CRYSA to CFC Pre-Academy into the All-In Academy and then on to Select soccer with All-In.

Games will begin in April in Crossville. Coach Aaron Alva will continue to serve as the Pre-Academy Director with Daniele Azzani and Manuel Fuentes leading training for Pre-Academy players. Desmond Bracero will serve as Rec Director.