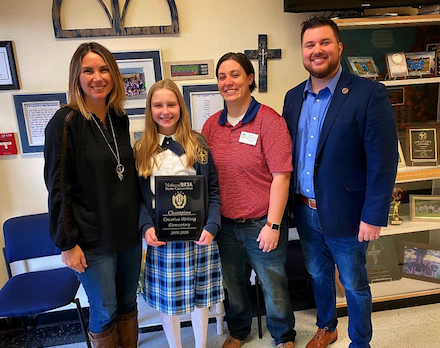 COOKEVILLE, Tennessee – Heavenly Host Lutheran School’s Junior Beta Club traveled to Nashville in November to compete in the Junior Beta State Convention, and one of its members took home a first-place distinction to advance to the National Convention.

Fifth grade student, Sophia Grimes, competed with fellow state Junior Beta Club members in the Creative Writing category, and her piece was selected as the winning entry.  “We are so proud of Sophia and her accomplishments,” said Jennifer York, Heavenly Host Lutheran School’s English teacher and Beta Club Sponsor. “This award is a reflection of her hard work in the classroom and her talents and abilities.”  Competitors were given 90 minutes to use creative details through written expression to interpret the topic of, ‘A Giant Box Showed Up on Your Doorstep.  It Had Your Name on It. What Did You Do with It?’  Miss Grimes now qualifies to compete at the National Junior Beta Club Convention this summer in Fort Worth, Texas.

“We are so proud of Sophia’s incredible accomplishment,” said Dr. Zachary Murphy, Principal. “She certainly represented herself and Heavenly Host Lutheran School well.  I’m thrilled that she now has a chance to compete on the national level too. We are excited for her and can’t wait to see what the future holds.”

Beta is a community service honor society devoted to promoting the ideals of academic achievement, character, service, and leadership.  It has become the nation’s largest independent, non-profit, educational youth organization. Heavenly Host Lutheran School’s chapter club is open to 4th through 8th graders who maintain a 90% in all classes and exemplify excellence and leadership in the classroom.

Heavenly Host Lutheran School is a private, Christian elementary and middle school serving grades K – 8th and infants through Pre-K4 in the Early Childhood Center. Its mission is to provide students with Christ-centered teaching and excellent academics that prepare students for service to God, community, and family.  Located in Cookeville, Tennessee, Heavenly Host Lutheran School celebrates over 25 years of providing Christian education in the community. Visit online at www.hhls.org or call 931.520.3766 for more information.