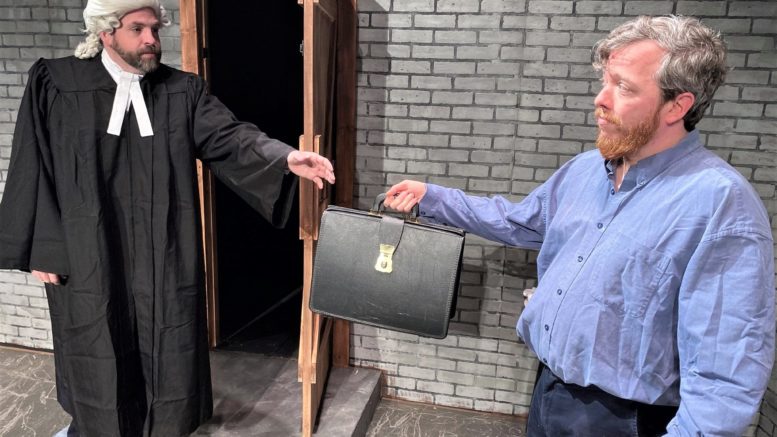 COOKEVILLE – A comedy? In a prison cell? Following a murder?

“This is a show that allows the audience to simply be entertained,” Patrick Mannle of CPAC, director of the play, said. “It is quite funny, and our actors, Ryan Steele and Lucas Flatt, really have committed to creating believable and accessible characters.”

Steele portrays barrister Wilfred Morgenhall, who has been assigned to defend Flatt’s character, Herbert Fowle – a man who has admitted to murdering his wife because of her constant joking and laughing.

Is the verdict a foregone conclusion?

Mannle doesn’t want to give too much away but praised the skills of Steele and Flatt.

“They have worked extremely hard and taken direction exceptionally well,” he said. “They have had a blast finding the ‘funny’ in places and have used their creativity to add to the text given to them by the playwright. It has been a total team effort, and I have greatly enjoyed watching them.”

“It’s the relationship between the two characters and how it develops in such a short time and under rather dire circumstances,” he said. “I also find the humor to be interesting, especially regarding what the character Fowle has done. While it deals with murder, it certainly is not what I would call a dark comedy. But, with it being an old British show, the humor can be somewhat dry at times, so finding ways to enhance or add to the funny without sacrificing or damaging the integrity of the playwright’s work has been a challenge but so much fun.”

“There is a lot of energy and showmanship that will allow audiences to really enjoy it and not have to think too much,” Mannle said.

“The Dock Brief” is ideal for CPAC’s Backstage Series, Mannle said, since it offers audience members an intimate backstage experience.

“It is much like going to see a show in what is referred to as black box theatre, where the audience is almost right on top of the actors, so to speak,” he said. “You feel immersed in the performance. You can see every facial expression, reaction, movement and bead of sweat.”

The comedy, produced by a special arrangement with Concord Theatricals, New York, NY, is approximately one hour long. It is suitable for all ages.