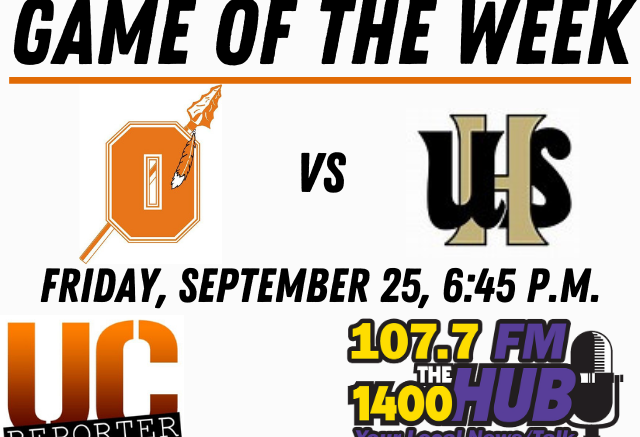 The Upperman Bees are looking to build consistency as they prepare to take on undefeated Oneida on Friday night.

The Bees (3-2, 2-0) defeated Oneida (4-0, 2-0) in a hard-fought 25-6 game that was closer than the score appeared in 2019, but both teams have been through some significant personnel changes since that meeting.

“They like to run the football and they like to play good defense,” said UHS head coach Adam Caine. “I know they lost some really good players, but they’ve got some good size. They’re very well coached. You’re not going to get them out of position. None of that’s changed, maybe just some of the names on the back of the jersey.”

“I’m expecting a really good football team to come in here. I hope that we can play our best game of the year and hopefully duplicate what we did last year.”

Upperman is looking to build off their 48-6 region win over Cannon County. To do it, they’ll have to overcome an Oneida team that has outscored their opponents 116-19 in four games and has yet to give up more than seven points to an opponent in a single game.

The Bees, on the other hand, have been on what Caine called a “roller coaster ride” with strong performances against Dekalb County, Smith County, and Cannon County mixed with tough losses against Cookeville and Livingston.

“I think it’s important for this team to learn they’ve got to practice well to play well,” said Caine. “I’m hoping part of it is preparation. I’m hoping they’ll put a good week of practice in. I think another part of it is when you get out there on Friday nights you’ve got to play with a little bit of confidence and not act like this is the first go around. We’re in the sixth ball game of the year, and most of these kids have played a good bit of ball. I think it’s two-fold.”

While the contest is a non-region matchup, Oneida is bringing a well-respected program and talented team to Baxter. Caine said the game can be a measuring stick for his team.

“I think they’re traditionally a forced to be reckoned with at their level of ball,” said Caine. “There’s a great deal of respect we have for them. Every game is important… but I think this can be a measuring stick. I think it can be something where if you play well you gain a lot of confidence. I think it’s very important for us moving forward.”

Oneida, much like Upperman, has a reputation for being a running football team. The OHS rushing attack presents unique challenges for the UHS front-seven.

“The number one thing with the tailback they’ve got is you’ve got to be able to tackle well,” said Caine. “I felt like we tackled pretty well last week, but for the season as a whole I think we’ve been a very below-average tackling team. It’s going to be very important this week to get the kid on the ground and not let him make a bunch of us miss.”

Kickoff between Upperman and Oneida is set for 7 p.m. It is the High School Football Game of the Week and will be broadcast live on the Upper Cumberland Reporter Facebook page and on Newstalk 107.7 and 1400 the HUB. Pregame coverage is set to begin at 6:45.