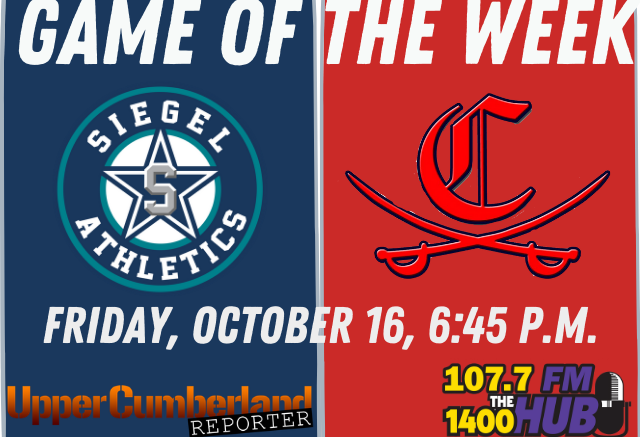 The Cookeville Cavaliers are preparing to begin a pivotal three-game stretch of the 2020 football season with a matchup against the Siegel Stars in the High School Football Game of the Week.

The Cavs (4-3, 1-3) are tied with Blackman for fifth in the Region 3/6A standings. The top four teams in the region make the playoffs.

It is likely if Cookeville wins their three remaining games against Siegel, Rockvale and Blackman they will make the playoffs, but the journey starts with the matchup against the Stars (0-7, 0-4).

“The first thing I told our guys when we came back from break was ‘guys, we’re in playoff mode right now’,” said CHS head coach Jimmy Maynord. “We have to win out to make the playoffs. If we don’t do that, we’re not going to be there. We want to try to play better football. More sound football. Not make the mistakes and be more disciplined than what we’ve been and more physical.”

Prior to the bye week, Cookeville dropped a 24-0 game at Warren County. After starting the season 3-1, CHS has lost two out of its last three.

Maynord said he is looking for his team to be more focused as they look to get back to their winning ways.

“I’ve been disappointed with our focus,” said Maynord. “I don’t think we’ve been focused. Our focus has been in many other directions and we’ve got to get that fixed. We’ve had a good week of practice and I’m hoping it shows Friday night.”

Maynord said he has been pleased with his team’s preparation.

“I’ve been very pleased with their preparation,” said Maynord. “I think we’ve had good preparation for the game. Hopefully, it shows up Friday night.”

The Stars are winless in 2020 but have been competitive in most of their games. They lost against Warren County by 5 and held top-ranked Oakland to its lowest scoring output of the season.

“When you look at them, they’ve played some close ball games,” said Maynord. “They haven’t won a game yet but they’re much more sound in the things they’re doing. They’ve got a really good tailback. They’ve got athletic kids on defense. I think they’re a good defensive team. They’ve been in ball games. I think we’re very even.”

The Cavs have been propelled by the play of senior quarterback Stockton Owen. Teams are game planning to try and slow down the star player, and Maynord said he knows his team needs others to emerge offensively.

“Obviously, that needs to happen,” said Maynord. “I know all eyes are on number six. We need to be a little bit more productive in the passing game. We dropped some passes in the Warren County game that had the potential to be big plays for us and we can’t do that. When we get opportunities to make plays we’ve got to make them.”

Despite the recent struggles, Cookeville still has an opportunity to accomplish several things in 2020. The Cavs play in what is widely-regarded as the most difficult region in the state, and they have an opportunity to be one of the top four teams in the region.

“That’s always the goal for us, to try and make the playoffs,” said Maynord. “We’ve been very fortunate that we’ve done that the seven years I’ve been here. I can’t remember the last time I was not in the playoffs as a coach. That is always the goal. We’re in a position where we don’t have to rely on anyone else to do that. We can do it ourselves. I don’t think you can be in any better position than to control your own destiny and that’s where we are.”

Kickoff between the Cavs and Stars is set for 7 p.m. Friday in Cookeville. It is the High School Football Game of the Week and will be broadcast live on the UCR Facebook page and on Newstalk 107.7 and 1400 the HUB. Pregame coverage will start at 6:45 p.m.