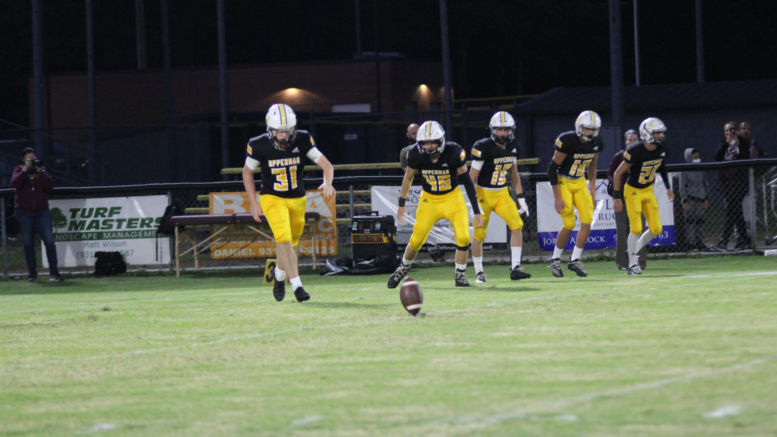 The Upperman Bees are looking to put four complete quarters of football together as they prepare to take on Grundy County on Friday night.

The Bees (5-2, 3-0) have won three straight games, but head coach Adam Caine said he is looking for consistency out of his team.

“It’s no secret, we’ve had some pretty uneven performances this year,” said Caine. “That opening game with Cookeville was a struggle for us, and then we beat what’s turning out to be a really good Dekalb County team. Ever since then it’s been an up-and-down roller coaster ride. Our biggest focus is, ‘can we ever play with consistent effort for four quarters?’ That’s the goal.”

The Bees are coming off a bye week. Caine said he liked how his team has returned to practice.

“They seem to be, kind of, refreshed and recuperated,” said Caine. “They break came at a good time.”

“They got a big win last Friday,” said Caine. “It looked like they gained confidence as that game went on. They had a lot of energy. I think it would be safe to say they’ve got a lot of momentum. It seems to be an opponent that has some talented guys. I think they’re playing their best ball. We’ve got a battle ahead of us.”

The Bees will look to build on their last three quarters of their previous game, a 26-21 win over York. The UHS had it’s strongest passing game of the season against the Dragons, and Caine said he hopes his two quarterbacks, Thomas Ensor and Ty Dutchess, continue to improve.

“I hope that (Ensor) will continue to put the work in and not just trust in his arm but get his feet organized underneath him,” said Caine. “We know what he’s capable of and we know what Ty’s capable of. We played pretty well offensively, and that kept us in the ball game. We’re going to continue to play them both.”

Upperman can clinch their third straight Region 4/3A championship with a win and Sequatchie County loss at York. Caine said it is important that his team builds momentum as they prepare for their final three regular season games and the postseason.

“I think it’s extremely important,” said Caine. “It seems to me like the guys are eager to come out and prove that we can. If we’re going to reach our potential as a football team, we’ve got to string together three good weeks here. It all starts Friday night.”

Kickoff between the Bees and Yellow Jackets is set for 7 p.m. in Coalmont.