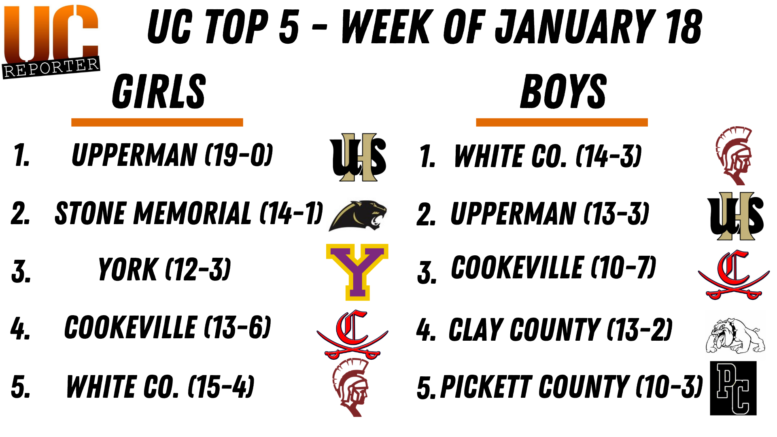 It’s hard to believe we are already past the midway point of January. Some rankings became easier this week, while some became much more difficult. Here is my weekly list of the top girls’ and boys’ basketball teams in the Upper Cumberland.

Outside of a slow third quarter against Dekalb County, the Lady Bees rolled through another undefeated week. They’ve earned the top spot in these rankings, as well as the top spot in the AP poll. Now they’ll have an opportunity to separate themselves from the pack in District 8/AA when they take on rival Macon County on Tuesday night in Baxter. But, has a new number one contender emerged in the district? We’ll get to that in a moment.

Another good week by the Lady Panthers, who have moved their winning streak to 14 games. They got a great win over Lebanon on Saturday and have not given any reason to believe they won’t be a state championship contender this season. Tuesday’s matchup with Cookeville looms large for both teams’ hopes of winning District 6/AAA.

Say hello to the new number one contenders in District 8/AA. The Dragonettes had been playing great basketball with wins over White County and Cookeville, but a 20-point win over Macon County stunned the basketball universe. The Dragonettes are clicking at the right time and are turning into a scary team. They’ve got one more matchup with the Lady Bees, and if they’re able to keep it close, we will be talking about York as a state championship contender.

A 17-point win over rival White County returns the Lady Cavs to the top-5. I wrote two weeks ago that this team could be scary if they get hot come tournament time, and Thursday’s win was a good start. CHS has several ways to beat you, and the one-two punch of Cassie Gallagher and KK Graves is hard for other teams to gameplan against. They have an opportunity to catapult up the rankings with a win over Stone Memorial on Tuesday night.

Is White County 17 points worse than Cookeville? I doubt it, but they do drop this week due to the showing. They had a bounce-back showing 24 hours later against Houston, but the Warriorettes can’t afford any more off nights if they want a shot at winning District 6/AAA. They are certainly still a top-five team in the Upper Cumberland.

A 2-0 week by Sparta leaves them at number one. Grant Slatten dropped 43 points against Cookeville, and the Warriors needed every one of them. Slatten, averaging over 36 points per game, is having the most dominant season I have ever seen in high school basketball. I have some questions about the depth of the roster when the postseason comes, but Slatten gives them an opportunity to make it to Murfreesboro.

The gap between 2 and 1 has been shrinking every week. The Bees seem to have found a rhythm, and that should be boosted when Isaiah Allen returns to the lineup. They were never challenged against Dekalb County and Cannon County. Barring a surprising upset, they appear to be cruising to another District 8/AA regular season title.

The Cavs fell short against Sparta, but a strong showing, without their starting point guard, against the number one team in the rankings does not warrant losing spots in the rankings. Josh Heard went toe-to-toe with Grant Slatten and did not look out of place. This CHS team will be able to compete in the district every night and has all the makings of a scary-good team in the years to come.

Another solid week for the Bulldogs, who have won six in a row. They appear to be the class of District 6/A, and have an opportunity to create separation in the district if they can top Trousdale County. At this point, anything less than a trip to the state tournament would be a disappointment. They are that good.

The Bobcats took care of Monterey last week to keep their spot in the top-5. Their February 2nd matchup against Clay County looms large, as it appears they are on a collision-course for the top two spots in the district. If they can compete with the Bulldogs in their second meeting, they can compete with anyone. This is one of my single-A sleeper teams, if you can even call them a sleeper.