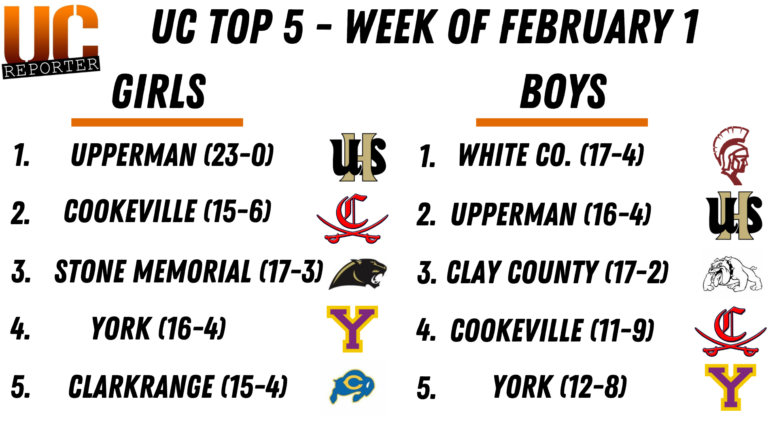 There are two weeks to go in the regular season. Contenders are emerging, and every game is a big one. The amount of great teams in the Upper Cumberland, particularly on the girls’ side is astounding. There are teams who did not make the list this week on each side, but could still win a state championship.

The Lady Bees remain at number one, and it is not close. They have one game in which they did not win by at least 13 points, and have now steamrolled ranked district rivals Macon County and York.

Right now, in my opinion, the Lady Bees are the best team in the state in any classification.

The Lady Cavs only had one last week, but they took care of business against Rhea County. This is a huge week for CHS with matchups against White County and Stone Memorial.

If they are able to go 2-0 they will essentially lock up the District 6/AAA title, if not, it’ll be a chaotic finish to the season.

The Lady Panthers got a huge district win over Sparta, and followed it up with a blowout over Rhea County to stay right behind Cookeville in the district standings.

They suffered a 12-point loss to Clarkrange, so they don’t move up in the rankings, but they did enough to stay at number 3.

The Dragonettes dropped their road matchup against Upperman, but they are still one of the top AA teams in the state. Their matchups against Livingston and Macon County are very important when it comes to the final standings.

This team is clearly good enough to make it to Murfreesboro.

Welcome back to the top-5, Lady Buffaloes.

They are on a 10 game winning streak, including the nice win over Stone Memorial on Saturday night. Led by the Monday twins, we’ve always known they were a contender to win a state title in single-A, but they are rounding into form and look like the team to beat.

White County got Grant Slatten back into the lineup just in time to earn a road win over Stone Memorial. They then dropped a narrow overtime battle against Warren County.

The Warriors can’t afford to drop any more district games as they battle to host the district tournament. Tuesday’s matchup against Cookeville looms large, but the Warriors complete resume is enough for them to retain the top spot.

The Bees dropped a close one against York, ending their 11-game winning streak, but the night wasn’t all lost as they got Isaiah Allen back into the lineup.

If they can regain their rhythm, I believe they are still a state championship contender in AA. Their rematch against York on Thursday night will likely decide the District 8/AA regular season champion.

The Bulldogs just keep winning, rolling over Clarkrange and completing the season sweep over Jackson County. They have an opportunity to essentially clinch the district title on Tuesday night against Pickett County. Their 10-game winning streak may just be getting started.

The Cavs handled Rhea County to earn their first district win. They now have a huge week against White County and Stone Memorial as they try to make up ground on Sparta, Stone and Warren County. They’ve been close against the top-three in the district, now we will see if they can string some wins together.

The Dragons got a signature win in Baxter against Upperman, launching them into the top-5. They’ve struggled with inconsistency, but when they are playing well they can beat anyone. If they can knock off the Bees again they’ll be in the driver’s seat in District 8/AA.