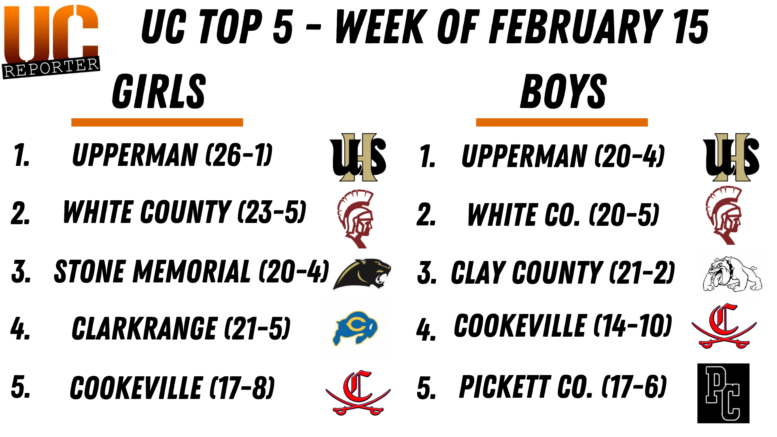 An unforgettable 2020-2021 regular season is in the books. We had classics, upsets and hundreds of highlight-reel plays, all in the middle of a global pandemic. This postseason promises to be great, but first we need to go through this week’s top-five.

The Lady Bees got a wakeup call on Thursday night in Lafayette as the Tigerettes spoiled their undefeated season. A slow start. coupled with a decision to stall in the fourth quarter that backfired may end up being exactly what Upperman needed from a mentality standpoint as I expect them to find some new motivation as they move into the postseason. They’ve already proven they are the class of AA when firing on all cylinders, now we will see if they can get back to that level of play.

Regardless, the Lady Bees just had one of the best regular seasons we have seen in recent memory.

What a win for White County over Stone Memorial on Friday night. Gracie Dodgen is one of the top shooters in the state, and she made one of the shots of the year to force a three-way tie atop District 6/AAA.

The Warriorettes were in a hole after dropping their first meetings against Cookeville and Stone, but responded by winning their final six games. While they won’t win the tiebreaker, they certainly appear to be a significant threat to make it to Murfreesboro.

The Lady Panthers were on the doorstep of winning District 6/AAA outright on Friday night before Dodgen’s shot. Despite the loss, it was a very impressive regular season for Stone, and they certainly have all the pieces to make a deep run, if they are healthy. With Tessa Miller in the middle and great shooters on the outside, Stone is a matchup nightmare for most teams in the state.

The Lady Buffaloes were very close to moving to the second spot in the rankings, but fell just short in their third meeting with Stone Memorial. They are my favorites in single-A to win a gold ball, and it would be shocking if they don’t make the state tournament.

The Lady Cavs went 2-0 and *we think, barring any changes at this week’s coaches’ meeting* will win the tiebreaker to win the 2020-2021 regular season District 6/AAA title. They haven’t played their best basketball over the last two weeks, but they have a great resume.

The upcoming district tournament will be huge, as Cookeville, Sparta, and Stone will battle to have home-court advantage in the region tournament, which could prove to be pivotal.

I usually do not add notes to the honorable mentions, but I needed to here. There are six teams deserving of a top-five spot, and the Tigerettes are the sixth team. They have their signature win over Upperman, and have avenged their earlier losses against UHS and York. They are absolutely capable of making the state tournament and are playing their best basketball at the right time.

The Bees closed the season by winning 15 out of 16 games and earning the District 8/AA title. If they can get through York in the district and region tournaments, they appear to have a clear path towards the state tournament. The question is, can they knock off teams like Jackson South Side. We will soon find out.

The Warriors have gone through an evolution in recent weeks. Jake Davis is emerging as a sharpshooter on the outside, and Thomas Paul and Thomas Brock are each providing much-needed depth. The player to watch: Cameron Stephens. In the absence of Kade Clark they will need Stephens to continue to be a big post presence like he was in the team’s win over Stone Memorial.

Side note: Grant Slatten just competed the most dominant individual regular season I have ever seen.

The Bulldogs just completed a fantastic regular season on a 14-game winning streak. They have a clear path to the state tournament. Grant Strong is well-deserving of his Mr. Basketball nomination and I fully expect to see his Bulldogs in Murfreesboro.

You want to predict a Cookeville game? Good luck. The Cavs could lose in the first round of the region tournament, and they could also win a state title. They are young, but they are extremely talented. Their total resume makes them deserving of a spot in the top five and I am excited to see this team in the postseason.

Is there a more underrated single-A team than Pickett County? They had a rough three-game stretch to open February, but outside of that have been very consistent all season, including a narrow loss to Clay County. If Zach Amonett can play at the level he is capable of, this team can not only make it to Murfreesboro, but compete at the highest level.