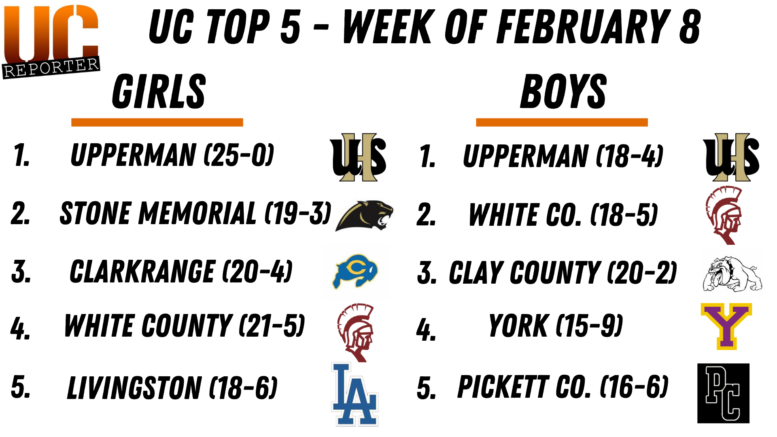 The final week of the regular season is here! There are still several district titles and tournament seeds to be decided over the next five days. It’ll be jam packed week of coverage at UCR, but first let’s see this week’s top five.

Another dominant win for the Lady Bees over a AAA team last week as they took down Cleveland in Baxter. This team is quickly rising up the ranks of all-time great teams in the Upper Cumberland. A second undefeated season in four years is within reach.

Wow. The Lady Panthers made a statement on Friday when they steamrolled Cookeville by 30. They knew they had to have the win, and they left no doubt. Tessa Miller had one of her best games, and the supporting players knocked down shots. That is a formula that could bring a gold ball to Crossville. If they top White County on Friday night they will claim the district title and host the tournament.

Clarkrange could make an argument they belong at #2 on this list, but we will wait for their third meeting against Stone Memorial on Tuesday before moving them to that spot. The Lady Buffaloes are playing great basketball, winners of 15 in a row. Just like Stone and Upperman, the Lady Buffaloes are one of the favorites to win a state championship.

The Warriorettes got back into contention for the District 6/AAA title with a huge win on the road at Cookeville. If they knock off Stone Memorial on Friday we could have a three-way tie atop the district (don’t ask me about the tiebreaker scenarios, it would be chaos).

I’ve said all season the Warriorettes could be very dangerous if they find a rhythm at the right time, it appears they may be on the verge of doing just that.

Welcome to the top-five, Lady Wildcats. The gap between LA and Cookeville was very close, but they get the edge this week by nature of their recent consistency. A six-game winning streak has given them an opportunity to take the second spot in District 8/AA, and their matchup with York on Tuesday looms large. This is a good basketball team playing well, they could make some noise in the postseason.

The Bees take the top spot for the first time. Collin Gore made the shot of the year to push their second matchup with York to double overtime, and UHS earned the win to take control of District 8/AA despite playing without Isaiah Allen and Kason Grissom.

They’ve won 13 out of 14 games, and have a great opportunity to go on a deep playoff run.

The injury bug has grabbed the White County Warriors. Grant Slatten seems to be overcoming his injury, but Kade Clark is still battling his. This is still a great team with an opportunity to go on a deep run, but they’ll need some younger players like Thomas Paul and Thomas Brock to step up to help accomplish their ultimate goal.

Another strong week for the Bulldogs as they captured the District 6/A title. They haven’t lost in 2020 and have two wins over a very talented Pickett County team. They’re playing great basketball at the right time and are putting themselves in a great position to make it to Murfreesboro.

Since December 22, the Dragons are 14-4. They own a win over Upperman and pushed the Bees to the brink last week in Jamestown. They’ve battled some inconsistency issues, but they have all the pieces to go on a deep run. Riley Cooper may be one of the most underrated big men in the state, and the Dragons have a shot against any team in Tennessee.

Pickett County nearly topped Clay County, and while they fell short they have shown they can hang with the Bulldogs. They dropped a matchup against Jackson County but were playing with a limited Zach Amonett before rolling past Clarkrange by 47. They deserve a spot in the top five for the way they’ve played throughout the season.