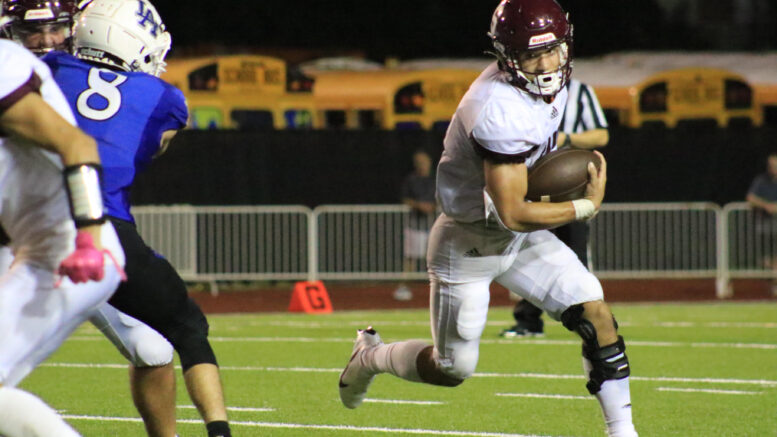 The White County Warriors are back from their week off, as they close out region play this week at Hunters Lane.

The last time the Warriors were in action, they suffered a 52-21 defeat at the hands of Hillsboro. Mikeece Jones put together a big game on both sides of the ball for the Burros, as they scored 31 unanswered points after the game was tied at 21 in the second half.

“We’re down three midway through the third and we had a shot to score, and we didn’t make it happen,” said WCHS head coach Mark Fraiser. “It seemed like the tide turned at that point…we end up having a turnover and they score. We shoot ourselves in the foot, and it’s kind of been the story all year.”

There were plenty of chances for White County to make big plays and take control of the game, but dropped passes seemed to occur at the worst moments.

Fraiser says if they make a couple plays here and there, they could’ve been talking about their first region win of the season.

“We’ve not made plays that are game-changing plays,” Fraiser said. “Not just this game, but in other games, we’ve had opportunities, but we just didn’t make plays offensively or defensively. I did think we had a couple big plays that were probably touchdowns that were drops.”

Since their dominant 41-13 win over Cookeville, the Warriors have lost four straight in region play and have been eliminated from the playoff race. If you ask anyone around the program, the bye week likely came at the perfect time since it gave players a chance to get away from the game and recharge mentally and physically.

“The kids are trying to regroup, and trying to realize that these final two games are important,” Fraiser said. “I talked to the seniors yesterday about how, coming back from the break, they still have a chance to go 5-5…it would be the first graduating class with a winning record. They could be a very successful class and set the tone for a long time.”

This week sees the Warriors wrap up their region slate, as they hit the road to take on Hunters Lane. As far as what film shows of this team, it’s another athletic team that are similar to the other teams White County has played, even if the records are different.

“They’ve got a couple athletes like every team we play,” Fraiser said. “They can run on offense. Similarly to us, they struggle with turnovers. It gives us a chance at a region win, and even though that’s not something we wanted to think about at this point in the season, I think it’s really important to get on the board with a region win. We’ve got to come out and show some intensity.”

It goes without saying that since both teams are out of the playoffs, this game is about pride and the desire to finish the season strong. For Fraiser, he says it would mean a lot to get that zero out of the region win column.

“I told these guys the other day, my thing is that we can’t change the past,” Fraiser said. “I don’t care what you’re playing or where you’re at, you’ve got to go out and compete…we’re going to go compete and play hard and take this like it’s the Super Bowl. I hope the kids follow that.”

The two teams will battle it out on Friday at 7 P.M. The game will be live-streamed on Upper Cumberland Reporter 4 on Facebook.