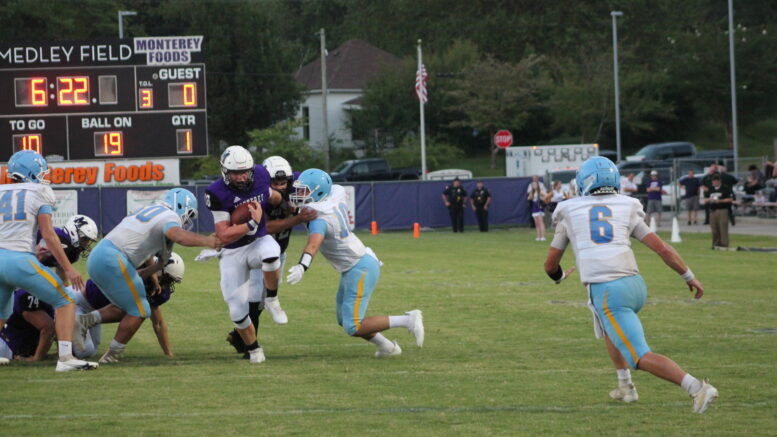 The Monterey Wildcats returned to the practice field on Monday after their bye week, as they prepare for one of the biggest games of the season: a region showdown with Oneida.

The last time the Wildcats were in action, they lost a close game to 3A opponent Waverly 19-14. In a game they picked up late the week before, Monterey had multiple chances to come out with a victory. Head coach Scott Hughes does like the way his team competed.

“I thought we had a phenomenal effort on both sides of the ball,” Hughes said. “I thought we left some points on the field as well…that was a football team that was averaging close to 50 points a game, and we held them to 19 and it was a very hard-fought 19 for them to get. We’ve got to be able to finish drives. Part of that was us, but part of it was also a testament to them being a really good football team.”

The main goal to picking this game up for Hughes was simply for the reason of not wanting to go two weeks between games. This allowed his team to maintain their focus and continue their improvement in his eyes. Win or lose, he felt like his team could only get better from playing this game.

And he maintained that thought after the tough 19-14 defeat.

“I thought it gave us an opportunity to compete and measure ourselves against a really good football team,” Hughes said. “We were able to accomplish being a better football team and understanding our deficiencies. We also saw that when we want to play and be pretty good, we can compete at a high level.”

Oneida is coming off of their bye week as well, and in their last game, they lost a 24-13 decision to Rockwood, a team that Monterey beat 43-14 earlier in the season. The Indians come in with a 5-2 overall record and a 2-1 mark in district play.

One look at the region standings tells you all you need to know about this game. It’s a battle between the only two teams with multiple region victories and it essentially serves as the region championship.

Hughes sees a lot of athleticism on film, and he knows that Monterey will need to play one of their best games of the season to come out on top.

“(Rylin Duncan) is a phenomenal football player on both sides, he’s really what makes them go,” Hughes said. “We know we’ve got our hands full with what they do. It’s a traditional football power. When you hear the word Oneida, everyone knows they’re good at football, and we’ve got to go up there so it’s a challenge. We’re excited about it.”

The two teams will battle at 6:30 P.M. on Friday. The game will be live-streamed on the Upper Cumberland Reporter Facebook page.