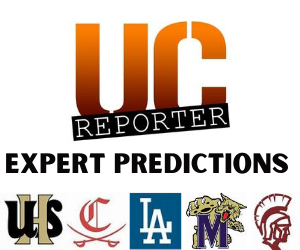 Pick: Upperman 27 – Elizabethton 23
Comments: This is 100% a gut pick. I’ve gone back-and-forth on this ever since the Bees took down Red Bank, and what I’ve settled on is this: I trust the Upperman front-seven on defense and the offensive line as two of the most important units in this game. The defense will take a hit if Ty Dutchess is unable to play, but Adam Caine has done a good job of adjusting to what he has. Jonathon Rushing proved that he can play a clean game if needed, and any defense at this point is going to struggle with stopping both Jaxson Rollins and Terrance Dedmon. Elizabethton could very well prove me wrong, and I’ll take it on the chin if they do, but my gut is telling me the Bees are Chattanooga-bound.

Pick: Upperman 30 – Elizabethton 28
Comments: I think the Bees pull away with this one. They are red hot and have proven throughout the season that they can handle adversity in many forms. I’ll take the road team.

To be the champ you’ve gotta beat the champ. Upperman takes on the back to back 4A state champion Elaizbethton Cyclones, Friday night. Or as my good friend Connor McGregor would call them… the Champ Champ. This game can unfold a lot of different ways Friday night. Either team can win a close game. I only see one team with the ability to blow the other out. Without a doubt this will be the biggest team Upperman has faced all season on both sides of the line of scrimmage. Elizabethton also has quite a bit of size at linebacker too. However, what they have in size they lack in lateral quickness and top end speed. Offensively the Cyclones will go as far as Bryson Rollins can take them. Rollins carried the ball 38 times in their quarterfinal upset win over top ranked Greeneville. Rollins isn’t as explosive as you might think of with 38 carries. Rollins runs hard and seems to always fall forward. Other players to keep an eye on offensively for the Cyclones are WR #17 Jake “The Snake” Roberts, who has some dangerous speed and RB #5 Cade Russell. The Bees defense should be able to load up the box to against Elizabethton to try and slow down Rollins. Offensively, Upperman will need to figure out early if they will be able to move that big Cyclones defensive line between the tackles. If the Bees can do that look out! Jaxson Rollins and Terrance Dedmon could have big nights. The biggest question for the outcome of the game is Ty Dutchess. Does he play? None of us know right now and we will not know until game time, I’m sure. The entire offense stepped up their game last week against Red Bank when Dutchess went out. Jonathon Rushing played as good as you could have asked him. Going to be one heckuva game Friday night.

Pick: Upperman 21 – Elizabethton14
Comments: This is going to be an incredible game. Two very strong defenses and two very capable offenses. I think this ends up being a low scoring very physical ball game. This is a game that can go either way, but I am going to pick it with my heart. GIVE ME THE UPPERMAN BEES!

I can hear it now… “Noah, you’re such a homer” but this is not a homer pick. When we turned on the Elizabethton tape we were expecting to see a team on par with an Alcoa, Oakland, etc. What I saw was a great team, but a flawed one. If not for one of the following: A Greeneville drop on a wide open deep ball, a Greeneville touchdown called back for a hold, a dropped interception in the endzone or an amazing one handed catch by Jake Roberts, the Bees would have a different opponent this week.

Bryson Rollins is a great quarterback who carried the ball 38 times against GHS, but only came away with 13 points. Meanwhile, the Upperman offense has been virtually unstoppable for the last month and a half.

For Upperman to win, they’ll need Jaxson Rollins to get to the second level (if he can do that consistently he will run all over EHS), prevent big plays and be the more physical team. For Elizabethton to win they’ll need to bottle him up at the line of scrimmage with their large defensive front (good luck), force turnovers and be much more efficient on offense than they were a week ago.

Ultimately, I think the Bees continue their great offensive play and put pressure onto the home team, force a couple of mistakes and leave East Tennessee with the biggest win in school history.