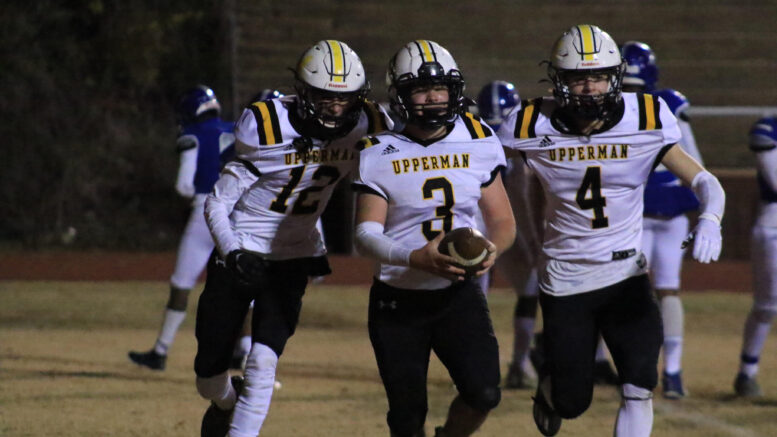 It was a situation most weren’t prepared for in Upperman’s quarterfinal game at Red Bank.

Late in the first quarter, senior quarterback Ty Dutchess got up wobbling after a play and immediately went to the ground holding his head. After being helped off the field, sophomore Jonathon Rushing took the field to right the ship for the Bees.

“I was just trying to get a couple plays in and let him recover,” Rushing said. “Then I realized I had to step up and be a leader and lead the team on offense…(I told myself) just don’t screw up. Just try to get everything down and don’t screw up.”

To say Rushing didn’t screw up would be doing the signal-caller a massive disservice, as he not only led the Bees on a touchdown drive, but 35 points as a whole in a 42-28 victory to clinch a spot in the 4A semifinals.

The first drive did help settle any nerves Rushing was feeling, as the Bees drove down the field to take a 14-7 lead.

“It helped quite a bit that we were able to put that drive together,” Rushing said. “It helped me realize that we’d be fine.”

For the sophomore, he says he was calmer than many would suspect once the Bees secured the victory.

“It was relief, because we knew we were about to advance,” Rushing said of the feeling once Upperman took a two-score lead. “It was just relief, and excitement.”

For everyone in attendance, it was an unbelievable sight that they were never expecting to see once Dutchess went down.

For head coach Adam Caine, it was the culmination of all the hard work Rushing had put in up leading up to that moment.

“What a coming-of-age situation,” Caine said. “To see him do it the right way. Took his lumps as the scout team quarterback. Picked himself up by the boot straps every single day. Every week, I say the kid I’m most proud of is Jonathon Rushing. He came in and went above and beyond. That’s why you coach.”

It’s taken an increased amount of patience for Rushing, as Caine pointed out after the game that he was a star in middle school that then had to bide his time at the high school level.

“He was a hero in middle school ball,” Caine said. “He got up with us last year, and things don’t come quite as easy from that eighth to ninth-grade year…I think he maybe started wondering if all the hard work was worth it, like we all do. Anything that’s meaningful in life, sooner or later you’re going to hit that wall and say ‘is all of this really worth it?’ He humbled himself. He earned the right to be the backup quarterback.”

While the injury to Dutchess was the unfortunate catalyst to Rushing’s big night, Caine was vocal in how proud he was of his team.

“I can’t tell you what was going through my head when I went out there and Ty was down,” Caine said. “But man, he came in and went above and beyond…I don’t know if I’ve got the words to really say how much he meant to us tonight. he sparked the guys tonight. It was beautiful, it was really cool.”

It was a moment that most Baxter natives weren’t prepared for, and most teams likely wouldn’t be prepared for their starting quarterback to go down in a state quarterfinal game.

If Friday proved anything, it’s that Jonathon Rushing isn’t most people, and the Bees aren’t most teams.

“I’ve put a lot of work in,” Rushing said. “I’ve gotten beat up at practice, getting hit…I’ve just put in a lot of work waiting for these moments, and it finally happened.”