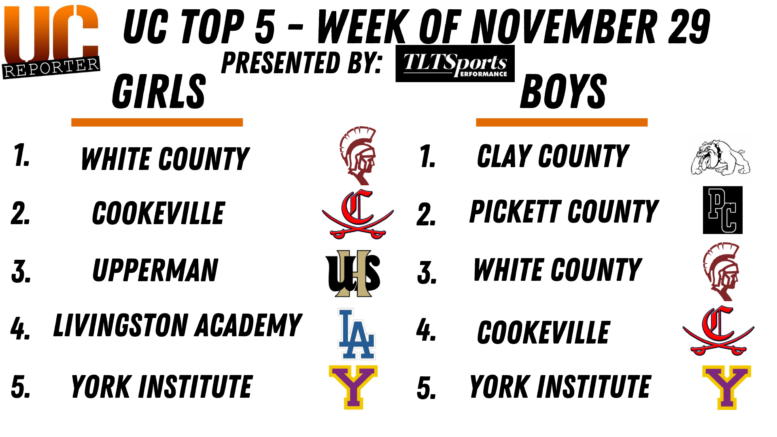 Throughout the 2021-2022 high school basketball season, UCR’s Noah McKay, Rusty Ellis and Kailee Means will put out their top five boys’ and girls’ basketball teams in the Upper Cumberland as part of the UC Top 5 Presented by TLTSports Performance.

Thanksgiving has come and gone and we are now into the heart of the high school basketball season. No new teams made the list this week, but there was some movement among the teams on the list. Let’s get to it!

The Warriorettes are 4-0 with an average margin of victory of 26 points. They have dominated three out of four teams on their schedule. Nia Powers, Celeste Reed and Alaina Stiles are a matchup nightmare for opponents, and each of them can lead WCHS in scoring on any given night. They have a big week facing Warren County and Cookeville, but it has been a great start to the season for the Warriorettes.

If not for the dominance of Sparta’s wins, the Lady Cavs would be number one on the list. They got a very impressive win over Knoxville Catholic and then rolled past Murfreesboro Central Magnet. Cassie Gallagher is right in the middle of the early-season Miss Basketball conversation and Jordan Gillies is settling into her role as the team’s starting point guard. Their matchup with White County is for the number one spot in the rankings.

When the Lady Bees just missed the top-five in the preseason, we said we needed to see how they looked without four contributors from a season ago. Well… we’ve seen them… and they’re still really good. The mantra of the season so far has been defense as they absolutely stifled Independence, holding them to just 19 points. Strong wins over Independence and MTCS propelled the Lady Bees into the upper-echelon of the top-five.

The Lady Wildcats and Upperman tied for the third spot, but Upperman got the nod due to their undefeated record. We have been very impressed by Leslie Riddle’s squad, and their lone blemish being a slim loss against Farragut is nothing to be ashamed of. We expect WCHS, UHS and LA to battle throughout the season for the top spot in District 7/AAA, and it would not be surprising if the squad from Hogeye country comes out on top.

The Dragonettes drop due to inactivity more than anything else, given they only played one game during Thanksgiving week. They also have the most lopsided loss of anyone on the list (albeit against Bearden). This is a very good team with a core of stars that should roll to a district title. Their matchup with Cumberland County on Tuesday will tell us a lot, with a matchup with Cookeville next week looming on the horizon.

The Lady Bobcats may be young, but they are undefeated. If they continue to win, they’ll challenge for a spot on the list.

The Bulldogs are 3-0 and Grant Strong has continued his dominance from last season into this season. They have not been overly dominant as a team, but they have knocked off two schools from larger classifications, and have no glaring holes on their roster. They were our unanimous number one.

The Bobcats got a boost with the return of star Zach Amonett, and he is returning to a core that is playing good basketball. They are on a collision course with Clay County throughout the season, and we think it is possible they are the two best 1A teams in the state. The Bobcats have very few, if any, holes on the roster.

The Warriors have only played two games, but they are 2-0 and one came over a top-five team on this list. They have the potential to continue to get better as the season continues and can have a different leading scorer every night. Thomas Paul and Jake Davis are a strong combination at the guard spots, and if they can continue to get production inside they will build into a complete team.

This is more of a blind-faith ranking than anything else. There is no shame in losing to a phenomenal Knoxville Catholic team, but the Cavs also dropped a winnable matchup against the Webb School. The Cavs have been ravaged by injuries and will continue to improve when some of their injured stars come back. Any team featuring Josh Heard and DJ Potts-Heard should be respected, so they stay on the list despite a 2-3 record.

The Dragons are 2-1 with a narrow loss at White County. This team should win their district, and could make some noise in the postseason. We are keeping a close eye on their matchup at Cumberland County on Tuesday night. A strong week could lead to the Dragons moving up the list.

We like what we’ve seen out of the Tigers so far, despite their loss at Warren County. Conner Close is a star, and the Tigers could compete for the top of District 7/AAA, we just want to see a little more before they enter the top-five.