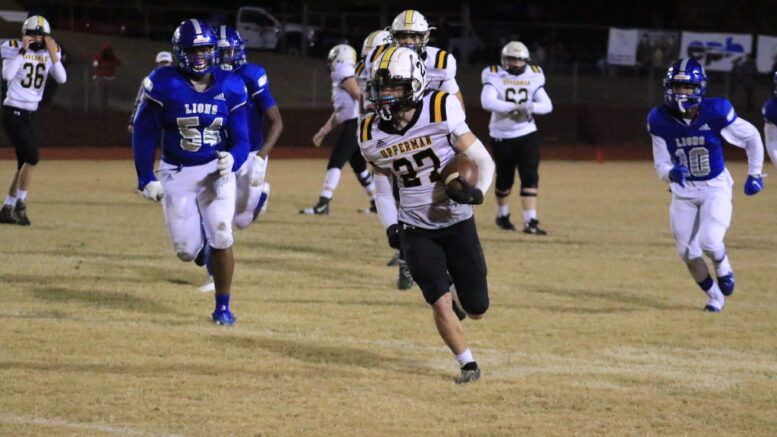 The Upperman Bees are looking to punch their ticket to the state championship game, but to do it they will need to get past the Elizabethton Fighting Cyclones.

The Cyclones (11-1) are the two-time defending Class 4A state champions, and the Bees (12-1) are preparing for their toughest test of the season.

“Their foundation is the line of scrimmage,” said UHS head coach Adam Caine. “The offensive and defensive lines seems to be the strength of their team. They play with the confidence and the swagger of a two-time defending state champ. They’re a very solid team. We’ve got our work cut out for us.”

The Bees are coming off a 42-28 win at Red Bank in the quarterfinal round. The Cyclones knocked off top-ranked Greeneville 13-7 in their matchup.

Caine said it is obvious the Cyclones are a great team.

“They’re extremely well-coached,” said Caine. “The don’t do a million things, but they do enough to keep you off their bread and butter stuff. They know what teamwork’s about. That’s harder to get ready for than a one-man show.”

Senior UHS quarterback Ty Dutchess left the game against Red Bank in the first quarter with an injury. He is a game-time decision for Friday’s contest. Sophomore quarterback Jonathon Rushing led the UHS offense to 35 points.

Caine said no matter who starts at quarterback, Upperman will need big performances out of running backs Terrance Dedmon and Jaxson Rollins.

“We can’t get negative plays,” said Caine. “We’ve got to be trying to move the chains. When we get the chance to make a play, those two guys are our playmakers and they’ve got to do it.”

To slow down Elizabethton, the Bees will need a plan to slow down senior quarterback Bryson Rollins. Rollins rushed 38 times for 200 yards in the Cyclones’ win over Greeneville and he presents a threat on the ground and through the air.

“He looks like he’s in total control of everything that’s going on,” said Caine. “He’s a great player. He makes plays. He extends drives. Just a special guy that needs to be accounted for at all times.”

This is Caine’s third coaching appearance in the semifinal round, and second at Upperman. He said he has learned the importance of having a fast start in these games.

“You can’t get off to a slow start,” said Caine. “The intensity level is going to be there. This will be the third time I’m playing a defending state champ and you know they’re coming out of the locker room ready to get back to the state title game. If you’re not mentally, physically and emotionally ready to go you’re going to get left behind. These guys were freshman the last time we were here, I’m hoping they have a desire to kick the door down and keep playing.”

Kickoff between the Bees and Cyclones is set for 6 p.m. CT. The game will be streamed on the UCR Facebook page and on 107.7 FM and 1400 AM the HUB with pregame coverage starting at 5:30 p.m.