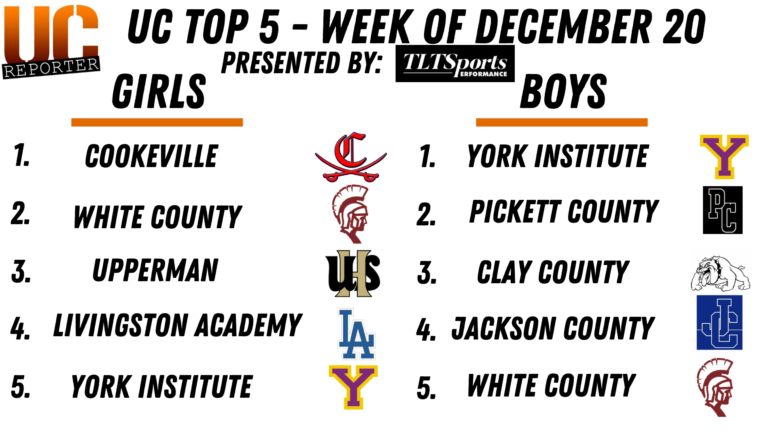 Throughout the 2021-2022 high school basketball season, UCR’s Noah McKay, Rusty Ellis and Kailee Means will put out their top five boys’ and girls’ basketball teams in the Upper Cumberland as part of the UC Top 5 Presented by TLTSports Performance.

Merry Christmas! The girls’ list this week stays the same, but the boys’ list sees a major shakeup with a new number one and a new team making the list for the first time in the history of the UC Top 5! Let’s get to the list!

Another undefeated week. Until/if they lose, they’ll be the number one team on this list.

The Warriorettes obliterated DeKalb County in their lone game last week. They have a tough two weeks upcoming with a strong Sonic Shootout slate and several good opponents at the Cactus Jam in Phoenix.

The Lady Bees steamrolled their way to a tournament championship in Florida, albeit against competition that was not the strongest. They have put their loss against Sparta behind them, and are back to their winning ways.

The Lady Wildcats took care of business and swept the season series against Pickett County. There are still some questions about how they’ll handle the upper-echelon of District 7/AAA, but it would not surprise us if this squad ends up on top of the district in February.

The Dragonettes went 3-0 last week with good wins over Clay County and Cumberland County. They’ll have an opportunity to challenge to move up the list this week in the Sonic Shootout with matchups against Warren County then matchups against Sparta or Clarkrange.

We have a new number one. The Dragons rolled past Clay County by 26 in one of the most impressive wins by any team this season. Despite their loss against Friendship Christian in the Sonic Shootout, the Dragons earned the top spot with their string of victories against quality opponents.

The Bobcats stay in the second spot after a 1-1 week which included a nine point loss at Coffee County and a win at Livingston, despite not having Will Amonett in those games. The gap between each of the top-3 teams is very small. The Dragons earned the top spot with their wins, but the Bobcats stay at two because their only losses came against 4A squads while battling injuries. They are within striking distance of the top spot.

The Bulldogs enjoyed a lengthy reign in the top spot, but fell by nature of their loss in Jamestown. After their home loss against Clinton we felt CCHS deserved the benefit of the doubt to hold onto the top spot, but the Dragons capitalized on some unanswered questions. Their win over Hampton was a huge get-right game, but the Bulldogs will need consistent production out of players not named Grant Strong as they look to defend their state title.

This is still one of the best teams in the state, possibly the best, and they could be back in the top spot soon.

Welcome to the top-five, Jackson County. The Blue Devils are 7-3 and got a win over Bradley Central without their star Ramon Cuevas. This JCHS team has a lot of firepower and experience, and could challenge York for a district title. They’ve always been in our discussions about teams who should be on the list, and we all agreed it was time they made the top-5.

The Warriors were in the fourth spot before their home loss against the Tennessee Heat in the opening round of the Sonic Shootout. The Heat are a good team, but we will be looking to see if the Warriors bounce back against Coffee County on Tuesday as they try to hang onto a spot on the list.