Two familiar names to White County Sports fans will be added to the walls of Roy
Sewell gymnasium this year. Each has a legacy that crossed paths in the early 80’s. Both are
noted for their contributions to WCHS students across multiple sports and educational pursuits as
well as graduates of WCHS. The Hall of Fame committee is proud to announce the 2021-2022
selections, Tammy “Pistol” Wilhite and Coach Keith Short.

Tammy Wilhite was known to many as “Pistol”. The nickname was given to Tammy by White County basketball great Tim Brock because her style of shooting looked like the shot of the legend Pistole Pete Maravich. Most WCHS sporting events from the 1980’s to her untimely death in November 2016, Pistol could be seen with a notepad and a camera covering the youth of White County. Pistol was the daughter of Jewel Wilhite Smith and the late Porter Wilhite. She was a 1983 graduate of WCHS and a member of the Warriorette basketball team. She was also a member of the 1981 team that received national ranking in the USA Today top-ten, and who won the Stockholm Basket Cup International in Stockholm Sweden. In her senior year the Warriorettes played in the TSSAA State Tournament. She was the true definition to student- athlete by leading by example and graduating number 5 in her graduating class.

Pistol attended Cassville Elementary, White County Middle School, and White County High School, before attending Tennessee Tech University. Pistol later worked in the Human Resource Department for Allied Signal and then began working in her dream job as the sports editor for the local paper The Sparta Expositor which lasted for 22 years. Covering thousands of miles and hundreds of games Pistol kept the readers informed of the great achievements of the youth of White County. Wilhite was honored as the 2013 6AAAA Media Person of the Year for the TSSAA. Endless hours and sheer dedication to the youth of the Sparta area was her way of investing in the future. With her busy schedule Tammy was always ready for a board game
challenge, a game night, or any other competitive challenge.

Pistol was also dedicated to teaching the game of basketball to the children of White County. She wanted to make sure that the long history of competitive basketball in White County continued. The knowledge instilled in her about the game from Coaches like Roger Scott and Keith Short in her mind was to be passed on to the kids she coached in the Sparta Youth Basketball League. She poured hours into coaching, administration duties, and helping kids achieve their goals. She was a teacher of the game and most of all a teacher “what it meant to be a Warrior/Warriorette, not just on the court or field, but a Warrior in Life.”

Tammy Wilhite left us way too soon, and the big shoes she left to fill will undoubtedly never be filled. The lives she touched as a youth coach are countless. The readers who waited to see what wonderful stories she would write in the latest publication of the Expositor about their kids, grandkids, or neighbors were many. The memories of seeing Pistol at thousands of sporting events still resonate in the minds of sports fans across the county. The WCHS homecoming parade will carry her name forever as the Tammy “Pistol” Wilhite Homecoming Parade. It is a great honor to add the name of Tammy “Pistol” Wilhite to the Hall of Fame Wall at WCHS.

The second inductee is “Coach” Keith Short. Coach Short is a 1964 graduate of WCHS. Coach Short lettered 2 years in cross country and went on to run at TTU where he lettered 4 years for the Golden Eagles. He began his teaching and coaching career at the White County Middle School in 1968 where he coached boys’ basketball, track, and was an assistant football coach. Coach Short had a record of 100-32 in boys’ basketball.

Coach Short then moved to WCHS and lead the transition for the girls’ basketball team to the new 5 on 5 rules. Short was at the helm of the Warriorettes program for 14 years and had a record of 298-125, averaging 21.3 wins per year. Under Coach Short the Warriorettes had great success, accomplishing:
6 TSSAA Sub State Appearances
3 TSSAA State Tournaments 1983, 1990, 1991
State Runner-up 1991
USA Today ranked # 15 in the Nation 1991
Champions of the Stockholm Basket Cup International – Stockholm, Sweden 1981

Coach Short also assisted in several other sports while at WCHS. He assisted in boys’ basketball, football, was the Head Coach of Track, Cross Country, Golf, 9 th grade girls’ basketball, as well as starting the softball program and being the first Head Coach. Coach Short has accumulated over 500 wins during his coaching career and touched the lives of thousands of student athletes. One of those included Tammy “Pistol” Wilhite, Pistol played on the teams that made represented WCHS at the State Tournament and in Stockholm, Sweden under the direction of Coach Short.

Both of this year’s inductees truly represent the spirit of what it means to be a servant Warrior. Countless hours of dedication and commitment were shown throughout their time here at WCHS and in White County. Each had a deep pride in wearing the Maroon and Grey and representing the school and the people of White County. Principal Greg Wilson summed it in a few short words, “Coach Short was my teacher whom I respected as a mentor, Pistol was a fellow student who loved WCHS and everyone associated with it. I am proud that our school and community can honor these two wonderful WCHS alumni.” 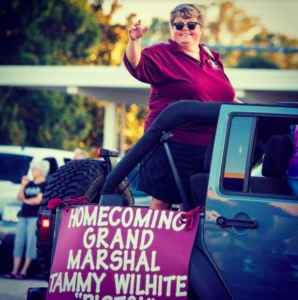 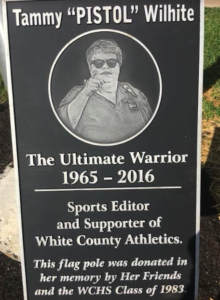 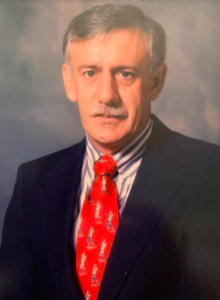