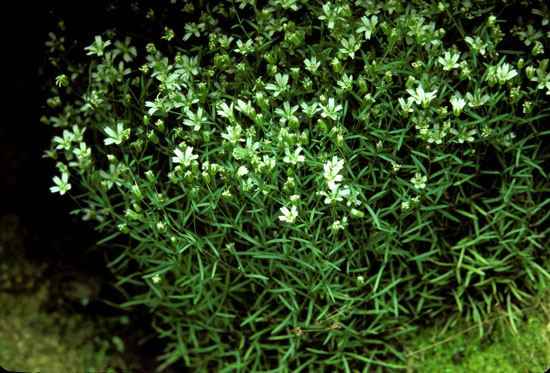 JAMESTOWN – Officials from the Tennessee Department of Environment and Conservation (TDEC) and the U.S. Fish and Wildlife Service (USFWS) today celebrated the delisting of Cumberland sandwort (Minuartia cumberlandensis), a plant found only on the Cumberland Plateau, from the federal list of endangered species.

The plant, found in a small area in northern Tennessee and southern Kentucky, was placed in 1988 on the Federal List of Endangered and Threatened Wildlife and Plants. The listing prompted the two states, federal agencies and conservation groups to protect the species. State and federal officials gathered at Hazard Cave at Pickett CCC Memorial State Park today to celebrate Cumberland sandwort’s new status. Hazard Cave provides a reachable location to view the plant, as does Slave Falls at the Big South Fork.

“This is a meaningful day for conservation,” TDEC Commissioner David Salyers said. “It’s a tribute to the partnerships involved that made this happen. This is another example of the great natural resources of our state and the determination to protect them.”

“The recovery of the Cumberland sandwort is a conservation success that would not be possible without our dedicated partners,” said Dr. Catherine Phillips, the Service’s assistant regional director for Ecological Services. “Partnerships are essential to the success of the Endangered Species Act and the reason this plant will be enjoyed for years to come.”

First described to science in 1979 by Dr. Robert Kral of Vanderbilt University and Dr. Eugene Wofford of the University of Tennessee, Cumberland sandwort occurs at the base and ledges of sandstone cliffs or rockhouses in only four Tennessee counties – Pickett, Fentress, Morgan and Scott – and one county in Kentucky, McCreary.

The USFWS relied on data from the TDEC Division of Natural Areas for the recovery. With funding and assistance from the USFWS, TDEC botanists worked with botanists from the Big South Fork National Recreation Area, rangers from Pickett CCC Memorial State Park and volunteers to achieve the delisting.

Threats to the species include incompatible recreational activity at the base of sandstone cliffs. Protection efforts that aided the species’ recovery, include the use of signs, fencing and boardwalks to inform visitors about the plant and avoid inadvertent impacts to the species on public lands. Cumberland sandwort is now found in 71 places, 66 of which are on federal and state lands, managed by the National Park Service, Tennessee Division of Forestry, Tennessee Division of Natural Areas or Tennessee State Parks. Pickett CCC Memorial State Park has 29 of the 71 occurrences. At the time of the listing, only 28 occurrences of the plant were known. To ensure the species’ viability, TDEC Division of Natural areas and partners will continue monitoring the species for five years under the guidance of a post-delisting monitoring plan, which defines thresholds of sandwort populations.