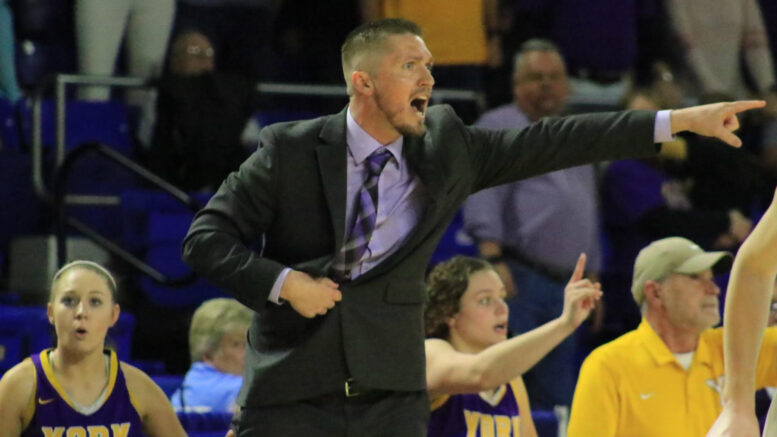 It was just a few months ago that Michael Green had the York Dragonettes playing in the Class AA State Championship, a Mar. 12 affair that saw them fall against Westview 47-37.

Now as the calendar turns to summer, Green has undertaken a new challenge at York as the school’s new head volleyball coach. And while he’s coached basketball for over a decade, he admits that this challenge is quite different from the game he’s known for most of his life.

“I think they had volleyball one or two years back in the 1980s, but I’m not entirely sure about that,” Green said. “I’m trying to tackle the task of getting this thing started, so it’s coming along slowly…it’s completely different. I have a limited knowledge of volleyball, and the biggest thing is we’ve only got two players that have played much at all.”

Whereas most of the players on Green’s basketball team play AAU ball in the offseason and all of them have at least an understanding of the game, he brings in two players that have middle school experience. That alone makes the start of any program an uphill battle, as he says the biggest difference is that you can put in a lot of individual work for basketball.

When it comes to volleyball however, it’s hard to practice when you don’t have at least one teammate present alongside you.

“There’s not a whole lot you can do in your downtime,” Green said. “Everybody’s played basketball. That doesn’t mean you’re good at it, but at least you’ve got an understanding. You can go to the house, and as long as you have a basketball goal, you can practice. Volleyball’s a little different.”

Another challenge for Green is the lack of feeder programs for York. South Fentress is the only middle school with a program, and those kids usually end up at Clarkrange.

With that in mind, Green’s begun to put in work to improve the amount of experience players can get at that level before they reach high school.

“We don’t have a feeder at this point in time,” Green said. “That’s something I’m trying to get rolling is creating more feeder programs and trying to get them started. That way when girls get up here, they’ve got at least a little knowledge. That’s been the biggest struggle, because we can raise money and get money for the program and all that, but we’re trying to play catch-up from a knowledge perspective.”

Many of the girls on the team will be recognized from the basketball team, as Green says Josie Linder, Annabeth Dunford and Emily Doss will all suit up. Incoming freshman Emma Pile will also play for the team.

As far as what the team looks like now, Green says he’s seen improvement, but there’s still a long way to go before the season starts.

“We have a few of the basketball girls, but I’m not going to lie; we’re going to struggle early,” Green said. “As far as knowledge of the game, only two of them has played the game, so I’m encouraging them to watch as much of the sport and learn as much as possible when they’re not at practice….we’re going up against teams that have girls that have played most of their lives. Our girls have seen a volleyball maybe three times in their lives.”

Make no mistake however, this is the same Michael Green you’ve likely seen on the sideline at basketball games. Green told administration that the only way he would do this was if it was competitive and done with intent to win.

That’s what he hopes the girls take from him early. He wants that competitive nature to trickle down and build a winning program over the next few seasons.