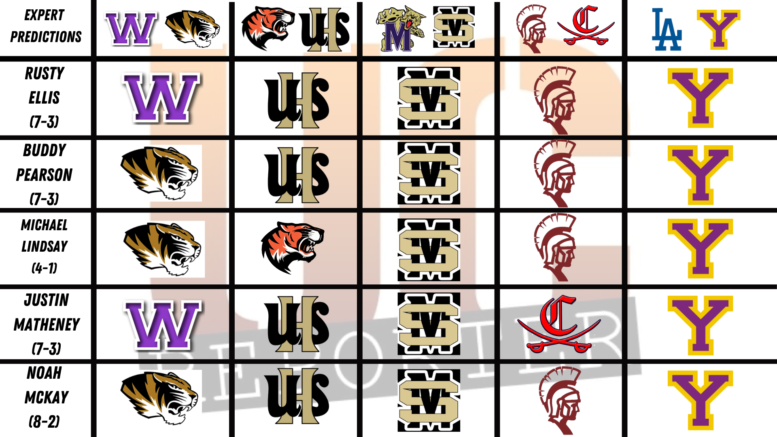 Comments: In normal circumstances, I’d pick DeKalb at full health. Losing Briz Trapp however, that makes a massive difference so I’m going to roll with the Purple Tigers in this one. It’ll be a battle, but the visitors will pull it out.

Comments: I am completely making this pick under the assumption that Briz Trapp is not playing. If he is, I reserve the right to change my pick. Losing Briz is a big loss for DeKalb County. It’s a loss they may not be able to figure out in one week.

Comments: The loss of Briz Trapp hurts DeKalb County, but with a week of preparation they pull out the close non-region victory.

Comments: The loss of Briz Trapp hurts DeKalb badly, but I think Colby Barnes and the DCHS offensive line will move the ball effectively enough to knock off the Purple Tigers. This one is an interesting matchup.

Comments: Alright, we got a lot of heat for not picking the Dragons last week, though on paper what we all said made sense. I’m going with York this week because at every position, they’re better than Livingston. Myles Leffew and company will put together a big game in a dominant effort.

Comments: York looked dominant in their games against Monterey at times. Coach Wright has all three phases of the ball locked in and playing hard. LA will have their hands full on both sides of the ball.

Comments: Fresh off a statement win vs. Monterey, the Dragons keep the train rolling with an easy win vs. Livingston Academy. Look for York to keep it simple and pound the run game, dominating time of possession in the win.

Comments: The Wildcats are improved over a year ago, but the Dragons are rolling after their win over Monterey last week. I’ll roll with the homestanding Dragons.

Comments: This pick says more about Stone than it does Monterey. It’s a non-region game so a loss isn’t going to mean the sky is falling for the Wildcats, I just think the depth that Stone has and the QB-WR combo they have in Hunter Heavilon and Kaleb Flowers will prove to be just a little too much.

Comments: Stone wins this with more depth and skill. 4A vs 2A here. The sky is not falling for the Wildcats but it will be a good test to see how Monterey bounces back after a tough region loss last Friday night.

Comments: Stone Memorial enters its toughest test to date against a Monterey squad looking to right the ship after falling last week. Monterey’s defense brings Stone Memorial’s explosive offense down to earth, but the Panthers do enough to pull out the win. Look for SMHS receiver/DB Kaleb Flowers to shine, and don’t be surprised if Bear Eldridge has an excellent game from the receiver spot as well.

Comments: The Wildcats are looking to bounce back after a disappointing effort against York, but they are running into a very talented Panthers squad. Hunter Heavilon is poised for a big game. I think the game has more scoring than the 7-6 game in 2021, but ultimately I think the Panthers prevail for the second straight year.

Pick: The Bees haven’t been playing with their food, so to speak, this year, and that’s why I see them winning this one by two scores. I think the line will come out early and establish the run and control the line of scrimmage. From there, it’ll come down to the defenses, and I trust the Bees more than any other unit right now.

Comments: Fayetteville stepping way up in classification may prove to be a little too much this week. Bees are rolling and haven’t been tested to this point in the season yet and neither have the Tigers, to be honest. Upperman looks to be a contender in 4A and you would expect them to handle business at home. Might be the toughest regular season game in the schedule for the Bees.

Comments: I can’t believe I’m picking against Upperman, but this Fayetteville squad has picked up right where they left off last year. Could be the game of the year on the plateau, but I see the Tigers sneaking away with a narrow victory. Coin flip game.

Comments: I’m going out on a limb on this one, but the Upperman defense is playing on a different level. The Tigers are rolling through the early portion of their schedule, but much like UHS they have not faced a team the caliber of their opponent this week. I have a hunch the Tigers will struggle against the Bees’ physicality, and Jaxson Rollins will have a big night as the Bees make a statement that they are the top dogs in Class 4A.

Comments: Sparta gets their second straight win over the Cavs and Malaki Dowell will continue his excellent senior season. A big game against a heated rival should also allow Dowell to stake his claim as the early favorite for class 5A’s Mr. Football award.

Comments: In all honesty White County wins this game going away. Cookeville doesn’t have the speed to slow down Dowell and the rest of the Warrior offense. Too much Cavalier blood in my veins to ever pick that other team. Only chance Cookeville has is to get the run game going and hope for an absolute shootout.

Comments: Despite the rivalry game atmosphere, White County takes care of business. Maybe a slow start following last week’s massive win, but White County settles in for the second and third quarter to run away with the victory.

Comments: Malaki Dowell lines up on the White County sideline, enough said. He is the best player on the field and he will be motivated to run wild on Sparta’s biggest rival. Tennessee Tech, offer Dowell a scholarship… Period.