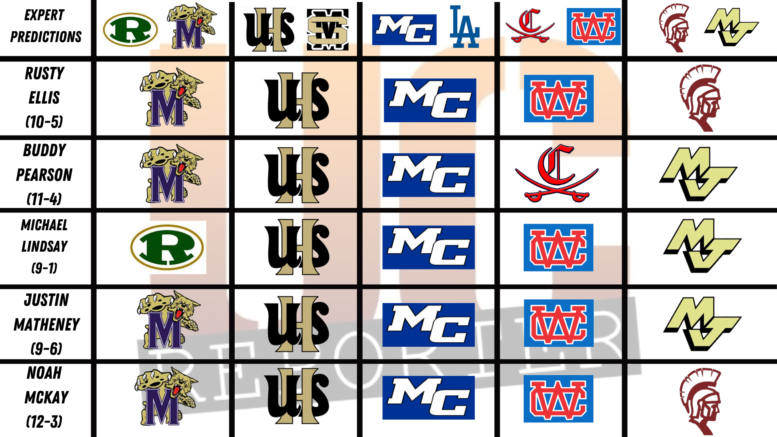 Comments: The Wildcats have suffered two tough losses in recent weeks, but I think they’ll get back on track against Rockwood. If they can spread the field out a bit more and get Mason Bowman going early, it has the potential to be a little bit more spread out on the scoreboard. It being a region game, I’m going to stick with the Wildcats in a close one.

Comments: The Wildcats get back on track this week. Rockwood has a lot of size up front and Monterey looks to have the better skill players in this matchup. I expect for the Wildcats to look more like the team we saw on the field weeks one and two than week three. Monterey gets a big region win at home.

Comments: This is as big as a week 5 game gets when you look at the landscape of Region 2/2A. Rockwood will present challenges for the Wildcats, but I think the MHS offense will be able to spread out the Tiger defense and use their speed to create some big plays. I look for Monterey to get back into the win column and get their season back on track.

Comments:   I like Stone’s creativity on offense but I think the Bees’ reality check last week will serve them well this week. Jaxson Rollins and Terrance Dedmon lead the way and hand Stone their first loss.

Comments: A great contest with contrasting styles in Crossville Friday night. This is a huge game for region standings. This has the chance to be a highly contested game deep into the second half. Upperman has yet to lose a region game under the direction of Coach Caine. Until they do it’s going to be hard for me to pick them to do so. I look for the Bees to grind out a gritty tough road win to notch their first region win of the season.

Comments: Region 4-4A’s biggest clash to date takes place in Crossville. Stone Memorial enters with an explosive offense and defense that held Monterey to 7 points last week, but Upperman still boasts one of Tennessee’s most physical football teams. Protecting the football will be key. Look for Stone to strike early, but Upperman to withstand the storm and take control late.

Comments: The sky is not falling in Baxter. They lost to a really good Fayetteville team in a game that should make them better in the long run. Meanwhile, Stone is firing on all cylinders. I am picking Upperman in this game because I think they will be able to sustain drives in this game, whereas Stone will need some explosive plays. They earned a win at Monterey with the help of three big plays, but this UHS defense presents some new challenges. This should be a fun game as well.

Comments: Livingston is getting better each week, though this week might not be pretty with Macon’s physical style. Gabe Borders has been a breakout star for the Tigers, who will run their record to 5-0 with a win over the Wildcats.

Comments: LA is improving each week, especially offensively. Unfortunately, Macon County comes in and spoils the opening of their new stadium.

Comments: Macon County enters the Class 4A top 10 this week and rides that momentum to an easy region win.

Comments: Keep the faith, Livingston. A very winnable game is looming on the horizon. Congratulations to Hogeye Country on your beautiful new home, we will check it out in person next Thursday. Meanwhile, this Macon County team is quietly approaching a 5-0 start to the season. Number one contenders?

Comments: This is a “prove it to me” pick. I want to pick Cookeville in this one, but I think Matt Turner’s Pioneers get it done with a physical Wing-T offense. Cookeville hasn’t been able to stop the run all season, so again, the Cavs are going to have to prove it to me for me to pick them.

Comments: Cookeville also is improving offensively. Just take a look at the 54 point output the Cavaliers had against their biggest rival in White County. However, the defense is more of a concern for me in this one. Until the Cavs can find a way to stop people from getting three, four, and five hundred yards of offense a night they aren’t going to win many games. I’m going to have to see them do it first to believe it. If the defense can catch up to the offense they have a chance to win this game and some others on their schedule the rest of the way out.

Comments: The Pioneers bounce back and take down Cookeville to get their second win of the season.

Comments: I have gone back-and-forth on this pick all week. If the game was in Cookeville, I would probably give the edge to the Cavs. If CHS can slow down the wing-T, they’ll leave with a huge region W. It is that simple. If they cannot, they’ll be sitting at the bottom of the standings looking up. This should be a really fun game on UCR 3.

Comments: Nobody was able to stop Malaki Dowell when he was more of an unknown and no one is stopping him now that he’s well known. It’s going to come down to one stop for the Warriors, and they’re looking at 5-0 and likely a home playoff game if they pull this off.

Comments: Mt. Juliet’s offense is better than the Cookeville offense the Warriors just faced. I don’t know if Mt. Juliet can stop #6 but I don’t know if White County can stop the Mt. Juliet offense either. This game literally may come down to who can get two stops. I can’t wait to watch it.

Comments: White County’s had two straight weeks of thrilling victories, but the party takes a temporary pause as a solid Mt. Juliet team holds off a talented Warrior offense just enough to win.

Comments: Is Malaki Dowell playing for the team in maroon and white? Yup, so I feel good about this pick. These two teams had a great game a year ago in Sparta, and I think the Warriors are better than they were a year ago and I am not quite convinced the Golden Bears are yet. This game has shootout written all over it and could go either way. I said I thought the Station Camp win was one of the biggest in school history. If Sparta wins on Friday, it’ll top that one.