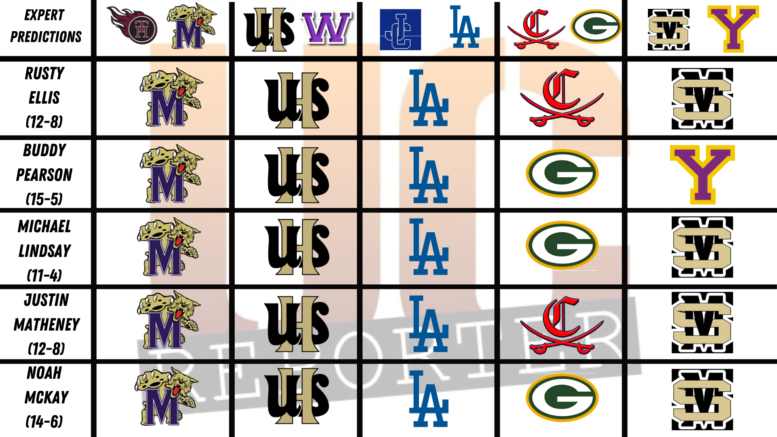 Comments: It’s been over a year since I last picked Livingston Academy and I think they finally get it done for Dale Flatt. The Wildcats have improved across the board and this will be the game where they show it. The defense will get more than enough stops to seal the win and LA will have a win to celebrate for the first time since the 2020 season

Comments: H-O-G-E-Y-E Hogeye Hogeye TNT! For the first time in one and a half seasons the LA Wildcats notch a tally in the win column.  This group has been through a ton. Having to play all last season and part of this one at Tennessee Tech, and a coaching change. Hats off to these young men for competing and getting better each week.

Comments: Livingston has been improving more than the scoreboard has shown this year, but they’ll change that with a win over Jackson County. I can hear the Hogeye chant now as the clock hits all zeros.

Comments: If this is a close game in the fourth quarter, big advantage to a more experienced Jackson County squad. Ultimately, I think Livingston’s offense is good enough to get some explosive plays. Couple that with a rocking home atmosphere on Thursday night and I think the Wildcats get their first win in the past two seasons.

Comments: This is a trap game for the Panthers. An emotional win over Upperman last week could lead to a hangover game for many teams, but I believe Derik Samber will have his team ready to move on to the Dragons. Hunter Heavilon will outduel Myles Leffew in battle of the two most athletic QBs in the Upper Cumberland and Stone’s defense will get a stop late to seal the deal.

Comments: York has a chance to win this game if they can hit some of the explosive plays they have been able to hit throughout the season so far. However, after watching the Panthers shut down, what we presumed to be, an explosive Upperman offense I think Stone Memorial wins this one.

Comments: Stone Memorial doesn’t get a break after last week’s dramatic win over Upperman. York certainly has the pieces to defeat Stone, if they’re not dialed in. SMHS fans will remember a shutout win over York last year, but this isn’t the same group of Dragons. A few big splash plays from Stone are the difference in an otherwise physical game controlled by the defenses.

Comments: What a game this will be on Friday night. Despite four of us picking Stone, it would not surprise me in the least if the Dragons get another win. These are two teams playing great football. This one will come down to quarterback play, and with two great ones I will lean towards the senior from Crossville to make enough plays for the Panthers to move to 6-0.

Comments: This is a faith pick. I think the Cavs are starting to put things together and a win over Gallatin would continue their good stretch of play. I’m looking for Mace Thomsen and Brock Owen to continue building their chemistry and those two, along with the defense will make enough plays to earn the third win of the season for Cookeville.

Comments: Cookeville has changed some things offensively with formations and splits to generate some run lanes. The Cavaliers are passing to set up the run which is backwards from how it normally goes. I truthfully know zero about Gallatin but I’m riding with the Cavaliers to get two in a row here.

Comments: Gallatin gets back on track following their loss vs. Hendersonville last week. Cookeville is certainly capable of winning, but I see the Green Wave bouncing back offensively.

Comments: Tough game to pick. Gallatin is better than their record suggests, and are particularly strong on the ground. Despite the Cavs’ improvement on defense, I am looking for them to take the next step and limit the Green Wave’s rushing attack. I’ll lean towards the home team, but this is a big opportunity game for the Cavs to get to .500.

Comments: Monterey is just better in this one. The Wildcats look to get a big mid season win as they prepare to lock up the number two seed in the region the second half of the season.

Comments: It’s hard to tell much on the Heat, but I do know Monterey is a team built to grind down opponents with their power run game. The Wildcats make it two straight wins and another impressive night for Mason Bowman.

Comments: The Heat look like a better team than they were in 2021, but Monterey just has way too many athletes. Wildcats roll.

Comments: The Bees clearly need a wake-up call after showing that the Fayetteville game was still bothering them last week. Stone earned that win, but the Bees did themselves no favors with bad penalties and late-game miscues. I’ll give them the benefit of the doubt against Watertown. This is where they can get back on track and get back to being the team we saw the first three weeks of the season. Give me the Bees.

Comments: This is a territory the Bees are not accustomed to being in since Coach Caine has taken over. Upperman should take advantage of a Watertown Tigers team that isn’t as good this year as they traditionally are. The Bees need to get the run game back on track for them to have success the rest of the year.

Comments: Upperman is in uncharted territory, coming off two straight losses for the first time since 2016. Don’t worry, though, the sky isn’t falling in Baxter. That’s a championship-level coaching staff and team at Upperman. The Bees have sputtered the last two weeks  on offense, but they get back on track Friday against Watertown. Upperman will look to spread the love offensively and get multiple names in the stat book and end zone. The Purple Tigers are no pushover, but Upperman prevails with a strong second half performance.

Comments: The Bees have been punched in the mouth the last two weeks, but they’ve lost to teams who are a combined 10-0. Look for them to perhaps air it out more, but they’ll mostly be looking to get Jaxson Rollins back on track. Too many athletes for the squad from Baxter in this one.