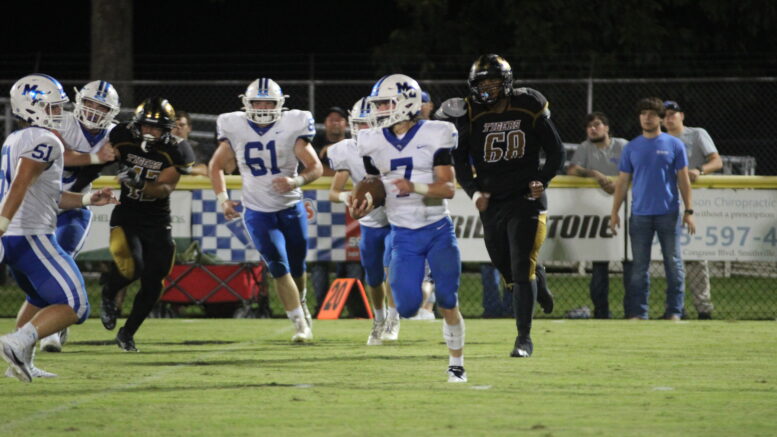 Story and photo by Rusty Ellis

It was another busy Friday around the Upper Cumberland on the gridiron, as several teams earned standout wins to finish off week three of the regular season.

Here’s our wrap-up and everything you need to know about the action.

The Tigers earned a big victory over DeKalb County on Thursday, leaning on the shoulders of sophomore Gabe Borders. Two long touchdowns and an interception on defense paced a physical, all-around effort for Macon, while DeKalb is now left with questions at the quarterback spot after junior Briz Trapp suffered a shoulder injury and is out, according to head coach Steve Trapp.

The Owls avenged a tough loss to DeKalb with a dominant win over Maplewood. While many people may have just given the region to East Nashville, there’s plenty of reason to believe that the Owls will certainly be more competitive than they were in that matchup a year ago.

Malaki Dowell furthered his Mr. Football campaign, as well as the Warriors’ undefeated record in a dominant Sparta win over Station Camp. Dowell rushed for 323 yards, had 67 receiving yards and six total touchdowns in the victory, putting him up over 800 total rushing yards through three games.

The Panthers moved to 3-0 as well, staking their claim in the region by taking care of business against Livingston. Over the remainder of the season, one figures that Hunter Heavilon, Kaleb Flowers and company have got just as good a shot as any to compete for a home playoff game.

Despite a good start to the game on defense, the Cavaliers couldn’t muster enough offense up to match Lebanon and fell behind quickly in the second quarter against the Blue Devils. A block punt and a punt-return touchdown put CHS behind 20-0 at the break and it was all she wrote from there. There were bright spots for Taylor Hennigan’s Cavaliers, just not on the scoreboard.

The Bees roll to 3-0 and complete the shutout they missed from a week ago against Trousdale. Jaxson Rollins ran for 153 yards and three touchdowns, while Ja’Lyric Cullom added another in the blowout victory. It’s hard to look deeply into this game and call it anything but the Bees taking care of business. The real main event for them is next week’s matchup against Fayetteville.

A score that appears much closer than the game actually was, the Dragons took a big lead early and controlled the tempo in their region victory over the Wildcats. In a region where many have talked about Monterey, Oneida and Rockwood, this game looks like a statement from York, and that statement is “don’t forget about us.”

The Blue Devils get their first win of the season after a tough opening two weeks against Clay County and York, and they do so in a stout defensive effort. Offensively, there’s probably plenty that head coach Sean Loftis would like to see improved, but a win’s a win and he’ll be the first to tell you that the growth should be consistent from here.

No team in the Upper Cumberland has had two tougher losses than the Pioneers, who went a long way across the state to nab their first win over Ridgeway. This Warren County team has been tested in the season’s first three weeks, and this could be a surprise team to watch in the coming weeks if they play to their capabilities.

The Tigers get their first win of the season as well, though the 0-2 start is not as bad as it may initially look. Smith County and Watertown both figure to have successful seasons, so this is where first-year coach Stephen Jackson’s squad will get rolling.