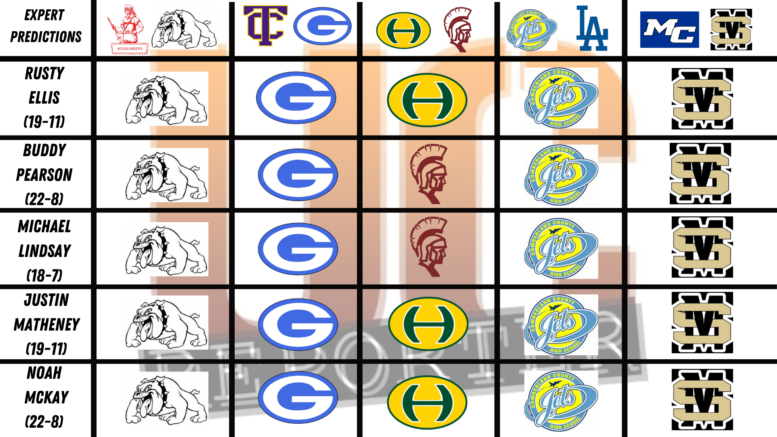 Comments: This is just a case of one team being better at every position than the other. Clay rolls to their sixth win of the season continues their reign in first place in the region. I’m really looking forward to when they matchup with Gordonsville.

Comments: Bulldogs roll in this one as they prepare for big matchup the last week of the season with Gordonsville and a deep playoff run.

Comments: Clay cruises in this one. I won’t waste your time with details, just take the Dawgs

Comments: The Bulldogs are simply the better team in this one. I don’t think they’ll have any trouble improving to 6-1 on the season.

Comments: I was concerned with the score of the Tigers’ win over Jo Byrns, I really thought Gordonsville would win that one going away. I’m expecting a bounce-back in all phases this week however. Normally, this is a great matchup but the Trousdale is down and Gordonsville is just going to have too much on offense for the 0-7 Yellow Jackets to handle.

Comments: Trousdale County just doesn’t have enough firepower in this one. Gordonsville looks to stack wins as the big showdown with Clay County looms in the final regular season game of the season.

Comments: ​​Another cut-and-dry game in the early October slate. Gordonsville has this locked up.

Comments: Hard to believe the Yellow Jackets are still winless, but I don’t see any way that changes this week. The Tigers are quietly taking care of business every week and are about to re-emerge on the statewide stage as they will be looking to capture the region. They roll on Friday in the Jungle.

Comments: SOMEONE IS GOING TO WIN. While Livingston has improved, they still have much of the same flaws they had a year ago in terms of inconsistent scoring and offensive line play, and lack of adjustments on defense. I trust Cumberland County on the coaching side much more and freshman quarterback Noah Potter will make enough plays to get CCHS their first win.

Comments: This is a really big game for both schools because this might be the last shot either team has to notch a win for the 2022 campaign. This one boils down to coaching for me. The Jets have the edge in that department.

Comments: Games are won in the trenches, and that’s where the Jets hold an advantage. Livingston will be rocking, though, so don’t expect an easy trip for CCHS. Look for Jet RB Drayton Hairston to go well over 100 yards.

Comments: Something’s got to give in this game. I think the Jets are doing good things. They are very young but they play hard and are well coached. Meanwhile the Wildcats also have talent, but have been sliding in the wrong direction. Ultimately, I think the Jets advantage in the trenches will lead to their first win of the season, albeit in a hostile environment.

Comments:  I was the lone person who picked Hillsboro a year ago, and I’m going with them again. It’s a chance for White County to keep their playoff hopes alive and prove me wrong, but I think the athletes that Hillsboro has will just prove to be too much. I’d love to be wrong.

Comments: The Warriors battled back last week to make it close at the end. Simply put if #6 doesn’t play, White County loses. If he plays and is decently healthy they have a great chance to win this one. A monumental game for the Warriors here. A win almost guarantees a playoff birth. A loss and the most successful football team out of Sparta ever, in all likelihood, will be on the outside looking in for the playoffs.

Comments: The Warriors’ backs are against the wall after slipping up last week, but good teams find a way. Give me White County.

Comments: I really hope I’m wrong. Sparta defense… prove me wrong. With or without Malaki Dowell, the WCHS defense will have to get stops against an athletic Burros squad to give the Warriors a chance to win. It’s simple… win the game and you’re (probably) going to the playoffs with the shot at the two-seed. Lose and there likely won’t be playoffs.

Comments: I’m going with the depth over star power here. Gabe Borders is a special talent, but Stone Memorial is one of the top-2 deepest teams in the Upper Cumberland. This along with their win over Upperman should put the Panther defense on the map, they’ve been great all year and they’ll be great again on Friday to move to 8-0.

Comments: I know my man Chris who tuned in to the coaches show on Tuesday will find this hard to believe, but The Panthers look to be the better team here and win a hard fought game in Crossville. Macon County’s back is against the wall, they have gone from controlling their path to a home field advantage to facing a road playoff game with a loss Friday night. Stone also has plenty to play for as well. With a win the Panthers are one game away from a region championship.

Comments: Another massive Region 4-4A clash pits the league-leading Panthers against a solid Macon County team. Stone Memorial’s defense is on another level this year and should be able to handle Macon’s physicality. Offensively, let Hunter Heavilon loose and watch what happens

Comments: What a great matchup. These are two really good football teams. The Panthers are rolling led by a tremendous quarterback and stout defense. It’s gut-check time for the Tigers and while it wouldn’t surprise me if they left Crossville with the W, I’m going with the undefeated Panthers who will make a big statement that they are the class of a loaded Region 4/4A.