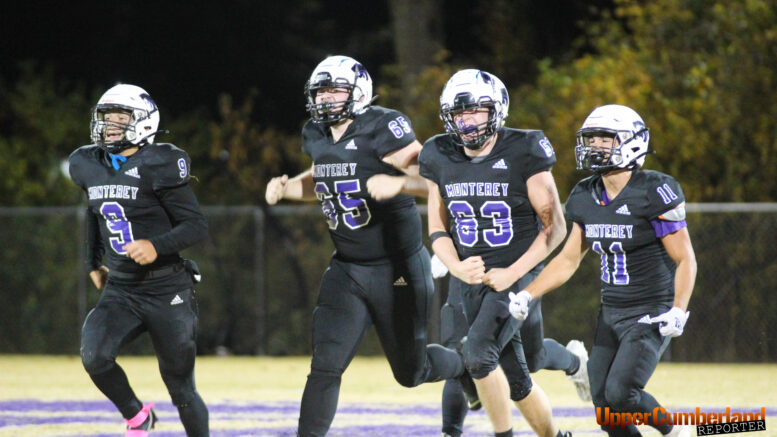 Friday night brought about several important region games, as teams around the Upper Cumberland are still jockeying for position in their respective standings.

Here’s everything you need to know about this Friday in football:

DeKalb County showed much of the grit that got them to 6-1 to begin with, but a Jordan Parker pass was tipped short on a two-point conversion attempt in overtime, sealing the one-point win for the Bees. Upperman now finds themselves in a three-way tie for first in the region, and the ending to this region race will be as chaotic as ever.

The Wildcats have all but guaranteed themselves a home playoff game with their dominant performance over Oneida. Thanks to six total touchdowns between Mason Bowman and Matthew Montgomery, the Monterey offense put together their most complete outing of the season and the defense was lockdown at every level. The Wildcats might be peaking at the right time as postseason play is looming on the horizon.

The Bulldogs are 7-1 now after their thrashing of Grundy County for homecoming. They’ll face a tough test in York Institute next week, but Clay County is playing some of the best football in the Upper Cumberland under Bruce Lamb at this point in time.

Another impressive showing on both sides of the ball for the Owls, they earned their seventh win of the season and sixth in a row over the Blue Devils. They’ll have likely one of the more entertaining games next week, as they take on Macon County in what’s sure to be a physical brawl in all the best ways.

The Cavalier defense got off to an impressive start in the first half against the Red Raiders, but a lack of production on offense and some big plays by the visitors led to a Cookeville defeat. The Cavaliers have shown improvements under Taylor Hennigan, Coffee County showed why they were in first place in the region on Friday.

The Pioneers suffered yet another close defeat, this one to Shelbyville for their first win of the season. This one’s even tough for Pioneer faithful to stomach, as unless something unforeseen happens over the final two weeks, this might’ve just cost them a playoff game. Sitting at 0-3 in the region, they’ll need to pull off an upset against Lebanon and get some help in the process in order to make the postseason.

The Dragons had to do some hefty traveling for their Friday matchup, as they fell short against Gibbs in non-region action. It wasn’t a poor showing on York’s part, more or less Gibbs just made enough plays to create separation on the scoreboard. Now thanks to Monterey’s win against Oneida, York’s game against Rockwood to close the regular season has a lot of meaning. They’ll have Clay County up first next week.