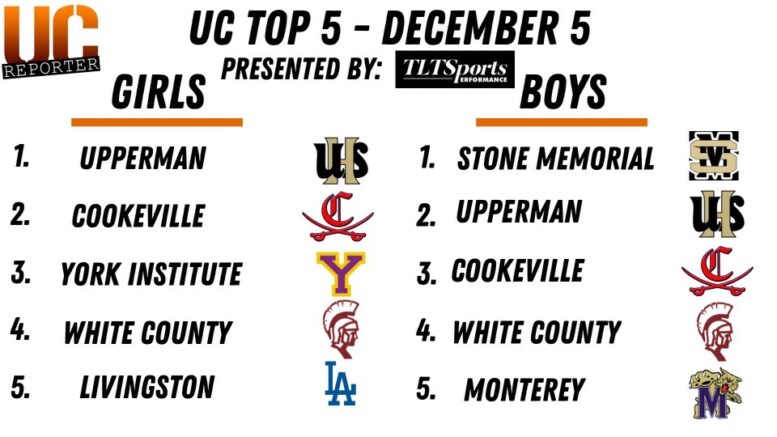 Please note this list is 100% opinion-based, and will change throughout the season.

Until the Lady Bees lose a game, they are firmly entrenched in the top spot on the list. A dominant defensive showing against Pearl-Cohn and a comeback win over Central (KY) paved the way to a 7-0 start for Upperman, and they’ll face a couple stiff teams this week in Tullahoma and White County.

The Lady Cavs leap-frog York by nature of their big win over rival White County. Jamie Gillies has this team rounding into form ahead of district play starting, and it all starts with her two-headed monster of Jordan Gillies and Cassie Gallagher. Two road contests await the Lady Cavs this week, as they’ll be at Oakland on Friday and at Stone Memorial on Saturday.

The Dragonettes stay in the third-spot, as they earned a really good win over Cumberland County at home. Their next couple could see York move up in a big way, as they’ll take on next Tuesday. For now, they remain steadfast at three.

Sparta’s had a really good start to the season thus far, though they suffered their first setback to rival Cookeville. The Warriorettes will be at Shelbyville tomorrow, and the marquee matchup of the week will be on Friday when they host Upperman. Will they be able to knock off the currently undefeated Lady Bees? We will see.

The Lady Wildcats remain on the list by earning wins over Pickett County on the road and Creek Wood at home. The former was a significant one for head coach Leslie Riddle, as it was her 500th career victory. If Livingston continues winning, there’s no reason for them to not move up the list.

The one constant on this week’s list is the Panthers’ spot atop the Top 5, as they are piling up win after win. The win over Knoxville Webb is a really good one, that saw Matthew Bilbrey put up 25 points. He and Cade Capps have formed a tough 1-2 punch for head coach Neil Capps. They can solidify their top spot with wins over Clarkrange, DeKalb and Cookeville this week.

Upperman moves up by virtue of their win over TN Heat and White County’s loss to Cookeville. There’s no argument to move Upperman down when they haven’t lost a game, and they’ll get their chance to make some real statements this week when they take on Tullahoma and White County.

The Cavs earned their marquee win of the season thus far by defeating rival Sparta to move up one spot. When Josh Heard plays, this is a different team, though the pieces around him are good. Players like Bennett Reeves, Jack Oakley and Jaren Davis are providing excellent minutes for head coach Josh Heard. If they can beat Stone Memorial convincingly and take down Oakland on the road, they’ll have an argument for the top spot.

This isn’t the College Football Playoff committee, so we aren’t going to overreact to one bad game by the Warriors against Cookeville. If anything, we think this could serve as a wake-up call for the Warriors. If they respond accordingly against Shelbyville and Upperman, they’ll be right back in the top 3.

Monterey continues to chug out win after win and whatever Lynus Martin is doing is working on the mountain. Tre Monette has been lights out averaging around 28 points per game and backcourt mate Brandon Dillon has been just as impressive in averaging over 20 points a game. Monterey’s staked their claim to be the front-runners of the district, and it’s hard to argue at this point.