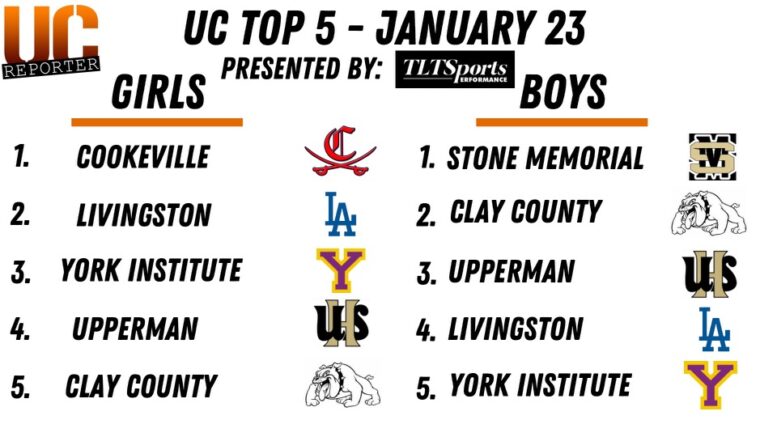 Please note this list is 100% opinion-based and will change throughout the season.

Cookeville (19-3, 3-0) put together a masterclass of a week as they won at Mt. Juliet on Tuesday before defeating Blackman (20-2) and Warren County (16-6) on back-to-back nights. The Lady Cavs have won 9 of their last 10 games and are putting together one of the best resumes in Tennessee.

Livingston Academy (18-3, 6-0) went a perfect 3-0 last week with wins over Stone Memorial, Pickett County (14-6) and Creek Wood (19-3). LA has won 10 straight games and hasn’t lost to a team from Tennessee in two months. LA hits the road three times this week as they play at Smith County, Macon County and DeKalb County. LA drops a spot this week as Cookeville defeated one of the best teams in Class 4A, Blackman.

The Dragonettes (19-2, 3-0) cruised through another week of District 5AA play with wins over Monterey and Bledsoe County. York has won 14 straight games and has an interesting matchup with Oneida (16-4) next Monday.

The defending 3A state champion Lady Bees (20-3, 5-2) avenged an earlier loss to White County on Friday for their 20th win of the season. Upperman currently sits in second in District 7AAA with games against Macon County and Stone Memorial this week.

The Clay County Lady Bulldogs (17-4, 5-0) enter the UC Top 5 following district wins over Gordonsville and Red Boiling Springs. The Lady ‘Dawgs have won 12 of their last 13 games and host Pickett County this week.

Stone Memorial (17-3, 7-0) made a statement this week as they beat previous #1 Livingston Academy by 44 points (82-38). Stone followed that win up with a victory at DeKalb County and currently holds sole possession of first place in District 7AAA.

Clay County (16-3, 5-0) rises to their highest UC Top 5 ranking of the season as they defeated Gordonsville and Red Boiling Springs this week. The Bulldogs have won 11 of their last 12 games and host Pickett County on Tuesday.

Upperman (15-4, 5-2) bounced back from a loss to Livingston on Jan. 13 with three victories last week, including a win over White County. The Bees have a shot at revenge Friday as they travel to red-hot #1 Stone Memorial, who beat them 64-41 on Jan. 6

A tough week for Livingston Academy (18-2, 5-1) sees them fall from #1 to #4 following a 44-point loss to Stone Memorial and a 3-point loss at Creed Wood. LA plays three road games this week as they travel to Smith County, Macon County and DeKalb County.

The York Dragons (12-8, 3-0) return to the UC Top 5 following wins over Bledsoe County and Monterey this week. York started the year 2-6 but has gone 10-2 since the return of multiple starters from football.