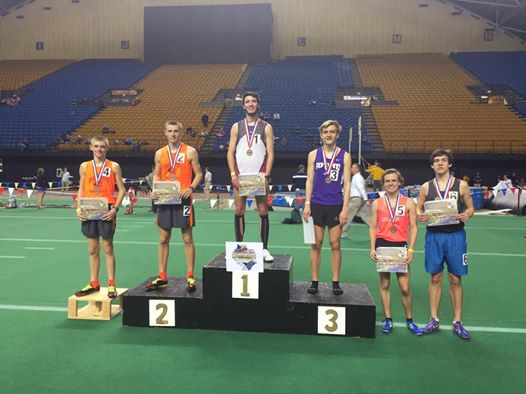 Track and field athletes from across the state convened upon East Tennessee State University in Johnson City on Saturday to compete in the first year of the Tennessee State High School Indoor Track Championships.  Among the athletes competing were three Cookeville High School distance runners, who each had qualified in a pervious meet during the 2015 indoor track season.  Qualifying and competing in the girls two-mile race was junior Maddie Fagan.  Maddie raced for a personal indoor record time of 12:41 and eighth place finish, narrowly missing the podium top six.  The girls race featured two nationally ranked athletes, with Makenzie Jones of Morristown West High School winning the event in a time of 10:47, and Taylor Cuneo of Central Magnet High School placing second in 10:52.  Turning to the boys races, both Nathan Longfellow and Conner Hawkins represented Cookeville in their two-mile and one-mile races respectively.  Junior Longefellow in the boys two-mile race also ran for a personal indoor track record in a time of 9:56, and made the podium with a fifth place finish being named to the First Team All-State Honors.  The boys two-mile race also featured two nationally ranked athletes, being won by Luke Meade from Sullivan East High School in a time of 9:27, with a close second by Javan Winders of Henry County High School in a time of 9:31.  Finishing out the races for Cookeville athletes for the day was Sophomore, Conner Hawkins in the boys one-mile race.  After a near fall in the first lap, Conner was knocked out of contention for the podium but finished the race in a time of 4:47, well off his previous best of 4:30 which he ran a week a ago at the University of Kentucky to qualify for this meet.  The boys one-mile race was won by 2014 Cross Country State Champion, Zach Long from Grainger High School in a time of 4:20.

Cookeville has high hopes of sending many more athletes to this meet next year as indoor track becomes a recognized growing sport for high school runners in the state of Tennessee.  The Cookeville High School Outdoor Track season will kick of with a home meet on Tuesday, March 10th, at 3:30 p.m. at Cookeville High School Track and welcome the public to come support the athletes.