The Putnam County Sheriff’s Office (PCSO) is pleased to announce the recipients of its 2nd Quarter Performance Awards: Deputy Matt McDaniel (Commissioned) and Deputy Duane Underwood (Non-Commissioned).
“I am proud of both of these deputies and would like to congratulate them on the fine job they are doing for the Putnam County Sheriff’s Office and our community,” said Sheriff Eddie Farris. “Their initiative, perseverance, and dedication to duty are an asset to our Department. We had so many worthy applicants that the selection for these awards continues to be very challenging and I look forward to awarding many more of our worthy deputies in the future.”
Deputy Matt McDaniel was selected for his outstanding dedication in tracking and locating a suspect in a stabbing incident that took place on April 15, 2015 on Jones Road in Putnam County.  Deputy McDaniel worked tirelessly with other deputies to locate and arrest Donald Goney, returning at 0600 hours on April 17 to concentrate his efforts on tracking the subject. Within three hours he had located a witness who was willing to make a statement and show Detectives where the weapon was located. He also made arrangements for another person to meet up with Mr. Goney so that deputies could arrest him. However, prior to the meeting taking place, Mr. Goney was located and arrested. Deputy McDaniel was instrumental in closing the case. Deputy McDaniel has performed his duties admirably and has led the Department in warrants served 7 out of the 9 months of this administration. He is a model employee and his actions on April 17 went above and beyond the call of duty.
Deputy Duane Underwood was selected for his outstanding leadership in the Juvenile Division of the Putnam County Jail. He always displays positive behavior and can always be counted on to perform whatever task is necessary without complaint. He even came in on a day he had taken off because he heard there was an influx of juveniles to be processed. Deputy Underwood is a fine example of the dedication and initiative that has become the hallmark of the Sheriff’s Office under this administration.
The Quarterly Performance Awards are judged by an independent panel of prominent Putnam County citizens who serve on our Citizen’s Strategic Advisory Council.  Nominations are received from our command staff in each of the divisions within the Department. The next Quarterly Performance Awards will be announced at the in September 2015.
Media contact:
Beth Nelson, PIO
sheriffpio@putnamcountytn.gov
931-267-8789
Photo Credits:
1.  Corrections Deputy Duane Underwood and Jail Administrator, Major Tim Nash
2.  Deputy Matt McDaniel and Sheriff Eddie Farris.
3.  Duane Underwood and Matt McDaniel 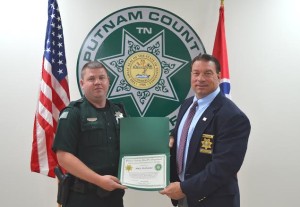