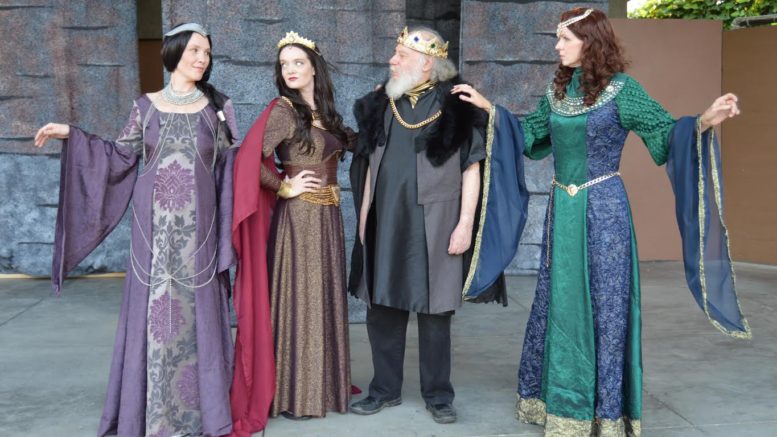 Shakespeare in the Park opens Sept. 29 with ‘King Lear’

COOKEVILLE – It’s the tragic story of an aging king and his three daughters.

Who loves him most? That’s what Shakespeare’s King Lear asks his daughters amid the nobility who have gathered as he prepares to step down from the throne.

“He decides to divide his kingdom into three parts, one for each daughter,” explained Dave Johnson, director of Cookeville Leisure Services’ 14th annual Shakespeare in the Park series, which opens Sept. 29 at 7 p.m. at the Dogwood Park performance pavilion. Admission is free.

The daughter who best expresses her love and devotion to the king is to be given the largest piece of the kingdom – and Lear is certain his youngest and most favored daughter, Cordelia, will meet the challenge. However, when Cordelia simply says she loves him as a daughter should (after her cunning sisters have flattered him excessively), the king becomes enraged.

“He disowns her right there,” Johnson said. “Afterward, some power vacuums begin to emerge.”

The role of King Lear is being played by Evan Cole. This will be his 10th stint with Cookeville’s Shakespeare in the Park series and 25th Shakespeare production altogether.

“I come from all over,” said Cole, who spent a number of years working with professional theater companies in Los Angeles until he “got tired of living in the city” and moved to Cookeville in 2007. He’s also worked in Chicago and spent two seasons with the Utah Shakespeare Festival.

“I love exploring a character – finding out who they are and what their relationship is with the other characters,” he said.

Cole said the role of King Lear is “an immense part,” one he’s anxious to portray for audiences who come to enjoy the show in the park setting.

Johnson said he’s pleased to have Cole aboard.

“This is a role that is coveted by any actor who has done Shakespeare, and it has to be done by an elderly person,” he said. “We’re very fortunate to have Evan, who is an extremely talented and experienced actor.”

“We have an amazing cast of experienced people playing all the main roles, so I’m really excited and feel very lucky to be able to work with these people,” Johnson said. “We also have an amazing technical and backstage crew.”

Shakespeare in the Park began in Dogwood Park in 2004, shortly after the opening of the performance pavilion.

“We wanted to provide a theatrical experience for the community in a non-traditional setting,” Chad McDonald, Leisure Services cultural arts superintendent, said. “Shakespeare in the Park targets the usual theater crowd, but it also appeals to those who would not attend a show in a normal auditorium.”

The show continues Sept. 30, Oct. 1-3 and 5-7 at 7 p.m. nightly. It will last approximately three hours. Plot summaries will be given between scenes to help audiences better interpret the Shakespearian language.

“Experiencing theater in the outdoor setting of Dogwood Park is unique,” McDonald added. “For example, we have had actors in battle scenes on stage while distant thunder rolls. We have had passionate love scenes being played out to the sound of crickets and wind rustling in the trees.

“Each show is different due to the unpredictability of weather, ambient noise, and city lights and sounds. In fact, some patrons attend two or three nights of a particular show for different experiences.”

For more information about Shakespeare in the Park, call the Cookeville Performing Arts Center at 931-528-1313.

Evan Cole plays King Lear in Shakespeare in the Park, which opens Sept. 29 at 7 p.m. at the Dogwood Performance Pavilion.

King Lear (Evan Cole) listens as his three daughters express their love and devotion to him. They are, from left, Sam Raper as “Goneril,” Emily Remmert as “Regan” and, at right, Kim Frick-Welker as “Cordelia.”