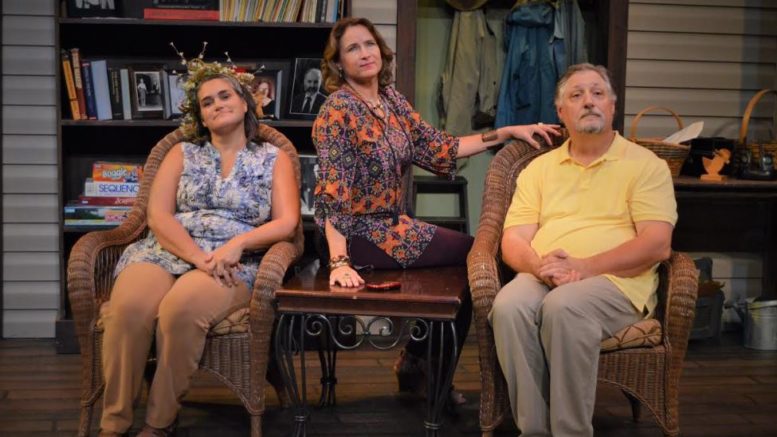 Sharon Henry, Nancy Campbell and Pat Frank perform a scene in “Vanya and Sonia and Masha and Spike” at Cookeville Performing Arts Center.

EVENT: Backstage Series: “Vanya and Sonia and Masha and Spike”

COOKEVILLE – What happens when middle-aged siblings Vanya and Sonia, who bicker and complain in the home they share, are visited by their movie star sister, Masha, and boyfriend Spike?

“The setting takes place in a converted sunroom on the family farm home located in Bucks County, Pennsylvania, where brother Vanya and sister Sonia – we learn early on she was adopted – reside after taking care of their mother and father who passed away some years previously,” Kim Frick-Welker, director, said of the comedy by Christopher Durang.

Vanya and Sonia reflect on how life has passed them by – and that feeling escalates when sister Masha arrives with Spike. Adding to the mix are Cassandra, a vocal housekeeper who is a soothsayer, and Nina, a lovely, star-struck young woman Spike meets at the pond.

“It is a well-written comedy that provides two hours of entertainment while prompting reflection and introspection about one’s life,” Frick-Welker said. “Have you lived to the fullest? If not, is there still an opportunity to do so?”

The cast includes familiar faces as well as newcomers.

“Durang is an acquired taste, but this is my second Durang show, and I love acting in his plays,” Frank said. “My cast mates are so talented and enjoyable to work with, and Kim is simply the best to work for.”

Mitchell, who speaks with an accent as Cassandra, said, “Performing with an accent is both fun and challenging. The biggest challenge is keeping the accent consistent through the scene.”

Montana Chambers (Nina), who made her acting debut in Cookeville Leisure Services’ Shakespeare in the Park production of “Much Ado About Nothing” last fall, is new to Backstage.

“What being in this play has taught me is theatre family becomes family for life,” Chambers said. “Art imitates life, almost to the point of painful. Always hope.”

Michael Evanichko (Spike), also new to the Backstage Series, moved to Cookeville from Ohio last year and has a background in theatre. In this play, he will be performing a scene in his underwear.

“Getting comfortable onstage in my underwear was the biggest challenge of playing Spike,” he said.

Backstage productions are selected especially for presentation in the intimacy of the backstage theatre setting, with audience members seated in chairs on the stage close to the actors.

“The small interior set of ‘Vanya and Sonia and Masha and Spike’ is ideal for the intimate setting of our Backstage Series,” Frick-Welker said. “Our audience will feel they are actually in that sunroom in Bucks County, Pennsylvania, and indeed, our test audience told us they would love to just curl up on the wicker sofa or in one of the wicker chairs with a cup of tea or coffee and a good book. Much of that credit goes to our producer and set designer, Chad McDonald.”

“Vanya and Sonia and Mash and Spike” is produced by Cookeville Leisure Services and CPAC through a special arrangement with Dramatist Play Service, Inc., New York. The show includes language and content which may not be suitable for all audiences.