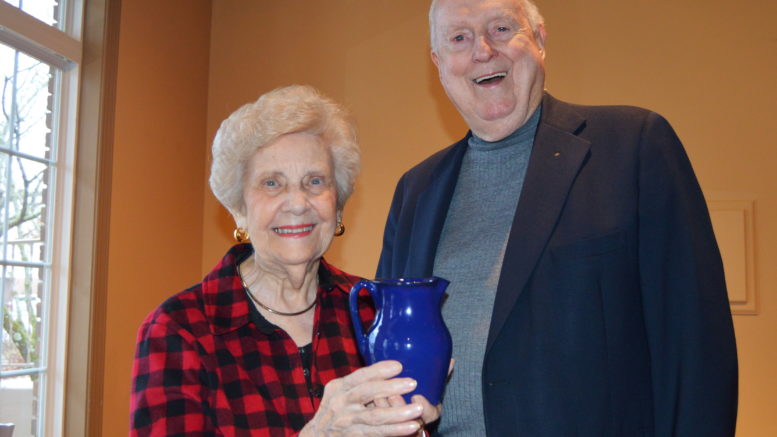 COOKEVILLE – Ahead of its time.

That’s how James Lacy described the Cookeville Pottery Company, which operated from 1936 to 1960. It was owned by his father, Lee Lacy, and great-uncle Arnold Lacy.

“We probably made more handmade pottery than anybody in the United States at that time,” James recalled.

The Cookeville Pottery Company employed local artisans who created a variety of pieces – butter churns, flower pots, vases, pitchers, cups, saucers and more – that are now coveted among collectors. Even today’s surviving family members are always on the lookout for that round, cobalt blue Cookeville Pottery stamp that identifies many of the pieces or, for pieces that weren’t stamped, those distinctive scrapes on the bottom, the look of the spout or even the way the handle was attached.

“I’ve never seen another piece of pottery anywhere that put a handle on just exactly like (our) men did… I’ve stood and watched it a thousand times,” Alvin Lacy, brother of James Lacy, said. “It’s certain things like that.”

James and Alvin said they are “about 95 percent” sure they can identify pottery that came from the family business that once stood at the intersection of South Willow Avenue and Spring Street, where Tier 1 Orthopedic and Neurosurgical Institute now stands. Back in 1936, the pottery was said to have been built on the “new highway.”

Ruby Lacy Sliger, daughter of Arnold Lacy, was around 6 years old when the pottery started.

“It was a big building, and it was kind of creepy,” she said.

Even so, young Ruby was fascinated by the talent of the potters who worked there – the way they could take a piece of clay and make it into a pitcher or some other work of art.

Travelers were impressed as well.

“A lot of tourists would stop by,” Alvin said. “They would almost always buy something. See, they would walk back there and watch it (being) handmade.”

Locals would stop by too, perhaps for decorative items for their home. Alvin met his wife, Barbara, when she came to the pottery with her mother.

“She would go there with me while I’d glaze stuff,” Alvin said. “She would do a little painting on some of the stuff herself.”

James and Alvin’s father, Lee Lacy, had been involved with the pottery since 1941, having bought his share from Arnold Lacy’s first partner, Oliver Sherrill of Sparta. Arnold’s father, William Lacy, also played a role in the planning and building of the pottery in the early days. Both Arnold Lacy and Sherrill were bricklayers – work they continued as they waited for the pottery to become profitable. In November of 1937, approximately one year after the pottery began, Arnold had written, “The pottery is a lot of worry and anxiety. No money and a lot of expense.”

That winter their clay froze, making it “almost impossible” to work. Arnold wrote: “We’re having a harder time than at any time during the depression. If things don’t get better, looks like we will have to sell out or sell someone an interest.”

But the Cookeville Pottery Company persevered until 1960.

Alvin and James, like several members of the Lacy family, worked at the pottery.

“I could do just about anything in the whole place except make (pottery) by hand,” Alvin said.

Some of those jobs included glazing, sales and going out to get truckloads of clay from Monterey and Paris, Tenn. They would then put the clay in large vats, add water and “let it set for two to three days” before running it through what James referred to as a “sausage machine.”

“We would grind it all up and make it real smooth where you could work it by hand,” he said.

They also remember firing the kiln to bake the clay.

“In the summer time, it would almost melt you over…” Alvin said. “I mean, it was really hot.”

Linda Buchanan, granddaughter of Arnold Lacy, cherishes her memories of the Cookeville Pottery Company. She recalls going there with her parents when she was a young girl.

One of Buchanan’s prized pieces from the Cookeville Pottery is a chamber pot with blue splotches on a white background that had belonged to her grandfather.

James Lacy and his wife, Claudine, cherish a pair of cobalt blue vases.

“This glaze is really beautiful,” James said. “Uncle Arnold was the only one who had the formula for this blue glaze… He never would give (it to) us or anybody else… He took it to his grave.”

Lacy family members have collected what they could through the years since not much was kept when the pottery closed. For them, it’s more than Cookeville history. It’s their history.

And they’re proud of it – enough so that they’re lending some of their pieces to the Cookeville History Museum for its latest exhibit, “Memories of the Cookeville Pottery Company,” which opens Jan. 25 with a reception from 1-3 p.m. and continues through March 7.

“It’s just real exciting,” Buchanan said of the opportunity to share their family heritage with the community. “Grandpa would be so proud.” 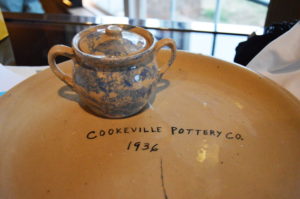