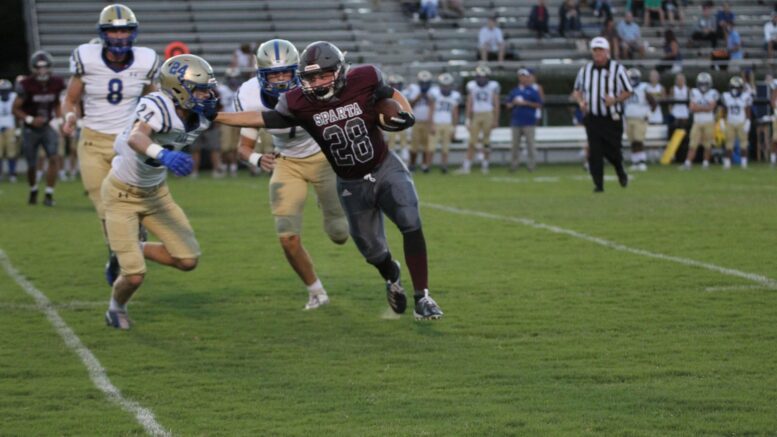 The White County Warriors have played some good football in their opening three games of the season, but, due to several factors, find themselves with a 1-2 record.

“We need to get some W’s, eventually,” said Frasier. “Winning cures everything. We need to win some games. Moral victories, I think we’re past that. I don’t think anyone here is excited about losing no matter what it looks like and who we’re playing. I think these kids will answer the bell and hopefully get one on Friday.”

The Warriors have an opportunity to get back in the win column Friday night when they will take on the experienced Walker Valley Mustangs (1-2) on the road. White County defeated the Mustangs 32-29 last season.

“They’re all seniors,” said Frasier on the Mustangs. “They’re very well coached. The quarterback does a great job directing traffic and throws the ball well. Up front, they’re a physical team. It’s going to be a tough deal for us. I just think they main fact that they’ve all played football before really shows on the tape. When you play a senior-laden team, it’s a tough out.”

While the Mustangs experience is an advantage, the WCHS coaches have seen the majority of the players play. Frasier said that provides insight when scouting the opponent.

“I think it helps with the fact that for us as coaches when you watch the film you know what you’re looking at,” said Frasier. “You’ve seen it before in person as opposed to trying to judge against different competition. We know what they look like. We know their size; we know what they’re good at and how fast they are.”

The Mustangs enter with a 1-2 record, but their two losses have come by a combined six points with each game being decided late against Rhea County and Bradley Central.

The Warriors are coming off a 56-33 loss against Cookeville. The game was 35-33 entering the fourth quarter before Cookeville pulled away late. In week three, they lost a narrow 10-7 matchup against CAK due to one fumble returned for a touchdown. Frasier said he hopes his team is learning the value of doing the little things right.

“They’ve got to learn the little things make the difference,” said Frasier. “One play here and there can change the football game. That’s happened to us a couple of times. Against CAK we had one snap cost us points. One play cost us a touchdown… There’s little plays every play that can determine the outcome. I think they’re getting that point now and I think the focus will be a little better as we go along.”

One player that has emerged on both sides of the ball for the Warriors is senior Kade Clark. Clark is used in a variety of ways on the offensive side of the ball and is an important part of the Sparta defensive line.

“Kade’s our leader,” said Frasier. “He’s an athletic kid for his size. He does good things for us. He and Hunter Pope are kind of ‘that guy’. They both can go back there and take snaps and get us some power yards. It is nice to have him back there to take some heat off of (sophomore QB) Malaki Dowell.”

Clark and the Warriors will take the field against the Mustangs on Friday at 7:30 p.m. in Cleveland.