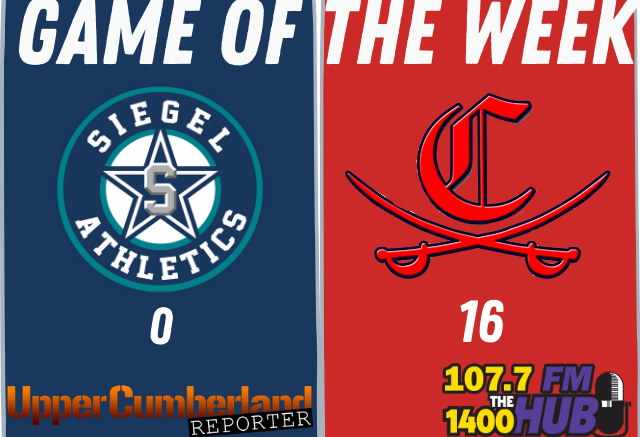 The Cookeville Cavaliers opened the first of three must-win games with a 16-0 win over the Siegel Stars on Friday night in the High School Football Game of the Week.

The Cavaliers (5-3, 2-3) will make the playoffs if they win their remaining regular season games, and they dominated the Stars (0-8, 0-5) in several statistical categories as they earned the Region 3/6A victory.

“I thought defensively we played really well,” said CHS head coach Jimmy Maynord. “Offensively, we did what we needed to do. We controlled the clock and kept the ball away from them. We still have got to get better in the passing game.”

The Cavaliers nearly doubled the Stars in time of possession, amassing 31:48 with the ball compared to 16:12 for Siegel. The lopsided time of possession was largely due to the dominance of the CHS rushing attack as they outrushed SHS 247 yards to 120.

“I think that’s how you win games,” said Maynord. “That’s what we like to do, (win) time of possession and hold onto the football.”

After the teams traded punts to open the game, the Cavs marched down the field on an 11-play, 66-yard drive that was capped by a 13-yard rush by senior quarterback Stockton Owen. The Stars blocked the PAT, and CHS held a 6-0 lead early in the second quarter.

The teams then traded fumbles, with the CHS defense recovering a fumble on their own 12-yard line. Cookeville captured the momentum by driving 79-yards on a drive that was capped by a 26-yard field goal by Andy Crockett to give the Cavs a 9-0 halftime lead.

Owen added his second rushing touchdown of the game in the third quarter, and sealed the game with an interception in the fourth on the CHS three-yard-line as the Cavs finished off the 16-0 win.

The Cookeville defense came through on several occasions throughout the game. They forced two turnovers while the Stars were in the red zone.

“It’s really big,” said Maynord. “That’s what won the football game. Getting stops when we needed to get stops. It’s big in a game like this.”

The Cavs will now turn their attention towards a matchup with the Rockvale Rockets (1-7, 1-5). With their playoff destiny in their own hands, Maynord’s message was clear.

“We’ve got to win out,” said Maynord. “I told the kids before the game, we’re in playoff mode. It’s the playoffs now.”

Kickoff between the Cavs and Rockets is set for 7 p.m. in Rockvale.