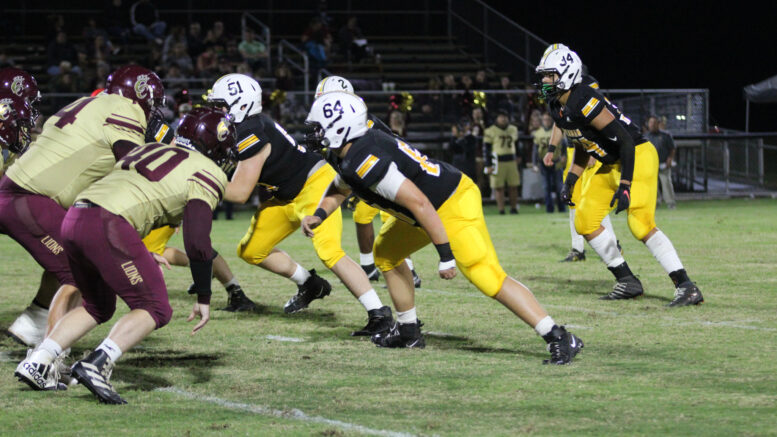 The Upperman Bees moved their winning streak to four games with a 48-0 win over Grundy County on Friday night in Coalmont.

Caine said his team accomplished their goal of having effort for four quarters.

“We got that tonight,” said Caine. “It wasn’t pretty all the time, but we started making some plays there and I’m proud of the way the defense played. Overall, I feel good about it.”

The region opponents battled to a scoreless tie at the end of the first quarter, but the Bees struck with 6:30 remaining in the second on a 14-yard touchdown rush by sophomore tailback Terrance Dedmon. Josh Manis’ PAT gave the Bees a 7-0 lead.

The Bees then rattled off 21 points in the third quarter with two more touchdown runs by Dedmon and another TD rush by Dutchess.

Jyron McClellan and Joseph Boehm scored rushing touchdowns in the fourth to push the lead to the final score of 48-0.

“The big thing that was different tonight is we played with a good deal of energy,” said Caine. “There was energy on the sideline. I’m proud of them for going down there and generating our own excitement and enthusiasm. Hopefully we can build on that.”

The stat sheet was lopsided in favor of the Bees. They outgained the Yellow Jackets 282 yards to 70 and held Grundy County to 2.2 yards-per-play.

“Early on our defense stabilized us and kept us in it,” said Caine. “We were able to figure out what they were trying to do to us when we had the ball. At that point, we figured the best thing to do is try and get the ball outside to our receivers.”

Dedmon rushed for 72-yards and three touchdowns on 13 carries. He has been asked to do more on the defensive side of the ball in recent weeks, but Caine said the Bees are looking to get the sophomore rolling on offense.

“I think it’s ultra-important,” said Caine. “We’ve got to have a two-headed or three-headed monster on offense to be as productive as we want to be. He ran the ball hard and broke some tackles. I know what he’s capable of doing. He’s getting used to what we’re asking him to do on defense and tonight… those three touchdowns were very big. I’m proud of him.”

The Bees will now turn their attention towards a road showdown with fourth-ranked 2A squad Watertown (7-1, 4-0). The matchup between the Purple Tigers and Bees is the High School Football Game of the Week and will be broadcast live on the UCR Facebook page and on Newstalk 107.7 and 1400 the HUB with pregame coverage beginning at 6:45 p.m.