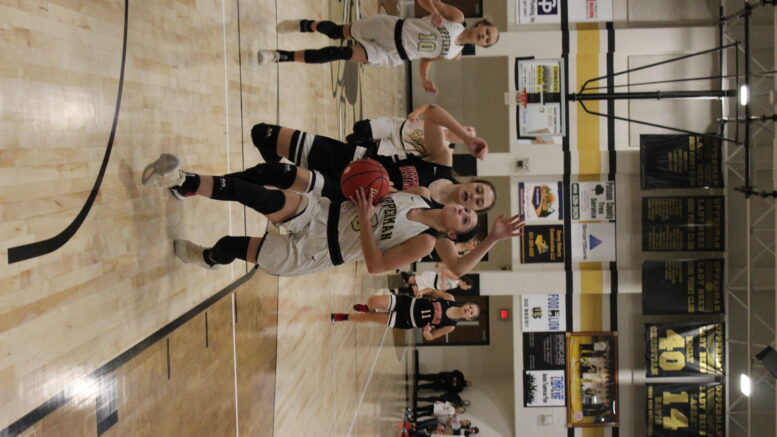 The Upperman Lady Bees have reason for optimism in the 2020-2021 basketball season.

A returning core of players featuring a Miss Basketball finalist, a supporting cast who were in the semifinal round of the 2020 state tournament before its cancellation due to COVID 19 and a 1-0 record after a season-opening win over Westmoreland.

The Lady Bees, who have made three trips to the state tournament in four years, are led on the court by Tennessee Tech signee Reagan Hurst. Hurst was a finalist for Miss Basketball in 2020, and is widely regarded as one of the favorites to win the award in 2021. She opened the season by scoring 27 points in the UHS win over Westmoreland.

“The strength that she has, has been a huge factor for her,” said McWilliams. “She finishes so well around the rim. She’s always had great speed and I think her adding the strength just allows her to finish even better. She just has a complete game.”

McWilliams said while Hurst’s talent is undeniable, the strength of her team comes in how complete they are across the court.

“It’s a team effort,” said McWilliams. “Reagan’s a great player, but we’ve got a lot of really good players. I think overall what makes us hard to beat is probably our depth and our balance. Our balance is tough to handle.”

The UHS backcourt is anchored by junior guards Brooklyn Crouch and Aiyana Levy who largely handle the basketball, while senior Bryan College signee Torie Brooks is known for her sharpshooting ability.

“I noticed how well we pushed the ball and got it out to the right people (against Westmoreland),” said McWilliams. “Every year Brooklyn’s improved running and handling the team. Making decisions. She’s always been a great defender but her overall game has been impressive. Aiyana carried herself very well the other night. She does so many little things for our team. She’s definitely a spark for us.”

In the post the Lady Bees are led by sophomore Abigail Johnson. Johnson was placed into the starting lineup last season due to an injury to original starter Ashland McClellan, who now plays at Bryan College. McWilliams said Johnson has greatly improved in the offseason.

“She’s a much-improved player since last year,” said McWilliams. “She’s really worked on her jump shot. She can go multiple moves inside now.”

After only losing one key piece to graduation, the Lady Bees are an experienced team. McWilliams said she thinks that experience is valuable, particularly after an unconventional offseason.

“We’re an experienced, veteran team. And that does help in a situation like we are in,” said McWilliams. “There’s so many unknowns. We know the season’s definitely going to be unpredictable and I think having a veteran team, they’ll be able to handle those things.”

Outside expectations for Upperman are high after winning two state championships in four years, with an opportunity for a third being cancelled. McWilliams said her expectations inside the program are always high as well.

“Expectations at Upperman are high,” said McWilliams. “Our expectations are not going to change. We want to give ourselves the best opportunity to be in that final game. We try to prepare ourselves each game. We just try to take it game by game. One game at a time. Hopefully that carries us the distance.”