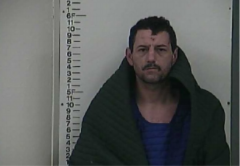 Sheriff Eddie Farris said when Deputies arrived, they found Terrance Denver Madondo of Nashville, Tennessee in critical condition as the result of multiple gunshot wounds. Madondo was flown to Vanderbilt Hospital, where he is still in critical, but stable condition.

A second individual was also present at the scene, Jared Lee Bandy of Byrdstown, Tennessee.

Jared Lee Bandy, 38 years old, was placed under arrest for Attempted Second Degree Murder and is currently under a $250,000 bond at the Putnam County Jail.

Investigators believe the shooting is the result of a domestic dispute.

The Criminal Investigation Division of the Putnam County Sheriff’s Office is investigating along with the assistance of the Tennessee Highway Patrol Critical Incident Response Team and the Office of the District Attorney.