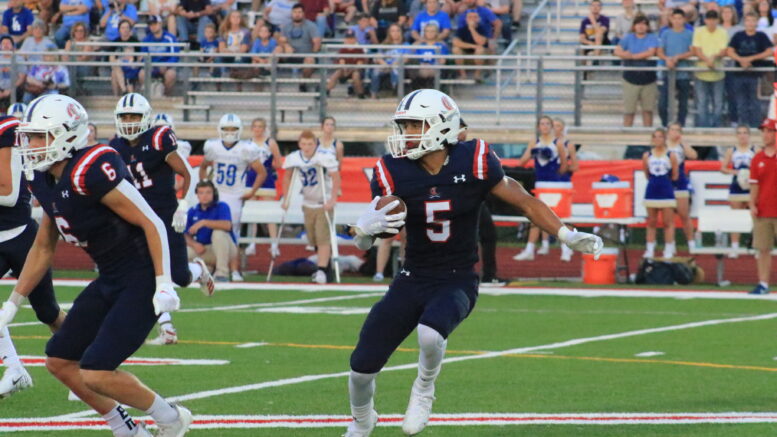 The Cookeville Cavaliers are coming off of their first win of the season against Livingston Academy, a 42-0 win that saw them hold the Wildcats to (-)30 rushing yards.

It was a positive sight for head coach Jimmy Maynord, as he says he saw a much cleaner effort in week two compared to week one.

“We had a lot of mistakes and penalties offensively against Upperman, and we just couldn’t get out of our own way,” Maynord said. “We had fewer penalties, and the only thing was that we put the ball on the ground a couple times, so we can’t do that…our defense played hard like they did against Upperman, and it was a much better football game than the week before.”

In his second high school start at quarterback, Mace Thomsen looked much more comfortable in the pocket against the Wildcats. For the game, he finished 10-16 passing for 111 yards and according to Maynord, he did a better job of understanding his role and controlling the offense.

“He’s settling in and starting to understand the speed of the game,” Maynord said. “He should get better and better as he goes, and that’s what we expect from him…hopefully, he’ll continue to grow and get better, and correct some mistakes that he is making.”

Another group that made strides against LA was the offensive line, as they opened up lanes for the Cavaliers’ stable of running backs (189 rushing yards) and gave Thomsen time to find his receivers downfield. Senior Sam Harness is the only current member of the line with experience at the position, making his voice as a leader crucial for the Cavs.

“He’s been there and has actually been a two-year starter for us,” Maynord said. “I think it’s important that you do have that leadership because that group is different from any other one on the field. They have to be a cohesive group that works together and makes calls with the different fronts that they see, so it’s very important.”

This week, the Cavaliers open up their new region against Lebanon, a team coming off of a 17-13 loss at the hands of Wilson Central in week two. It’s been almost seven years since these two teams played a game, as they met back on Sep. 26, 2014, in a 69-6 win for Cookeville.

For Maynord, it’s the Blue Devils’ experience and speed that sticks out the most on film.

“They have a lot of returning starters, especially on the offensive side,” Maynord said. “I think they return seven or eight starters on the offensive side. They have a lot of speed at the skill positions…they’re probably faster than anyone we’ll see all year. They’re very dangerous offensively. I know it’s going to be a completely different football team than what I saw on film against Wilson Central.”

For the Cavaliers to win, Maynord says it’s the little things they’ll have to focus on and correct ahead of Friday’s game.

“You can’t have six block-in-the-back penalties and things like that,” Maynord said. “There’s going to be mistakes and I get that…you want to see some consistency and week-by-week improvement, not making the same mistakes. If you continue to make the same mistake and you’re being coached to not make that mistake, then it’s probably time for someone to replace you. That’s the bottom line.”

The Cavaliers will host Lebanon this Friday at 7 P.M. to open region play. The game will be live-streamed on Upper Cumberland Reporter 3 on Facebook.