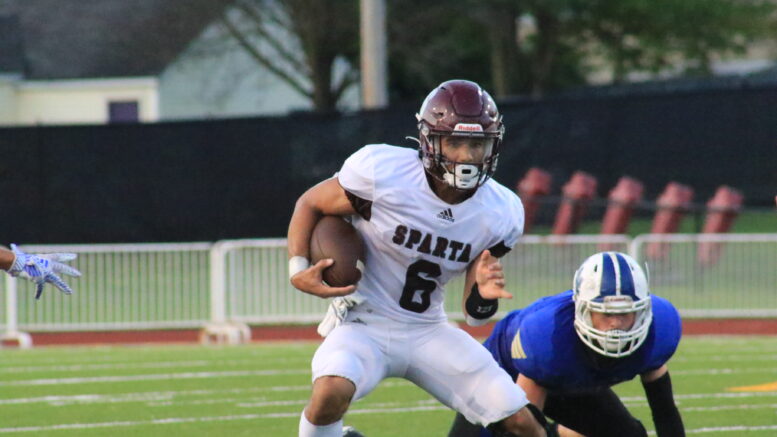 For all the events that happened in 2020, many around the Upper Cumberland remember it as the year Malaki Dowell broke out onto the high school football scene for White County.

Notably, it was his 297-yard, four-touchdown game against rival Cookeville that showed the area that the Warriors had a bonafide star on their hands. While it may have surprised many, the one person that it didn’t shock at all was WCHS head coach Mark Fraiser.

For him, it was something he almost expected from Dowell.

“I’m more shocked when he doesn’t do things like that to be honest,” Fraiser said. “There’s nothing he can do that would shock me. If he runs for 700 yards, I could see it happening. He’s just that good of a player, and he makes it easy to root for him.”

Dowell’s sophomore season was cut short by a torn ACL he suffered against York Institute in week five, another game in which he led the Warriors to a dominant 54-13 victory. Just like that, his breakout year was over with five games left in the regular season.

For Fraiser, he knew it wasn’t good when Dowell went down and didn’t get up right away.

“He’s such a good kid and works so hard, it was just devastating to see someone who was not going to get to enjoy the last few games of the season,” Fraiser said. “It was sad, it really was. From the team aspect, you know what you’re losing. It wasn’t a great feeling.”

Torn ACLs have become common-place in football, as many players suffer this unfortunate injury every season. For many kids, it might even be the end of the road for them in terms of their athletic career.

This wasn’t the case for Dowell, however. Instead, he simply laced up his cleats and got back to work.

“During the summer months when the season was getting closer, you could see the effort he was putting in,” Fraiser said. “Some kids, you tell them they have to go to rehab. He would go more than they wanted to. He was one of those guys you had to drag out of the room to get him to stop working on it…he was a leader even when he was hurt, and he put in the time to get back to where he is now.”

The road wasn’t easy, and it featured its fair share of challenges. One of the biggest in Fraiser’s eyes was getting Dowell’s conditioning back. In a preseason scrimmage, Fraiser remembers a long run the junior broke and near the end of it, he pulled up winded.

Just like every other challenge, Dowell got back to work immediately.

“He knew it right after that run,” Fraiser said. “He was worn out for the rest of that scrimmage. That was a Friday and I told him he needed to be running on Saturday and Sunday. I come out to the field house Saturday morning, and of course, he’d already beaten me there. He was running on the field…we think we’ve still got big things coming for him in the future.”

All of the hard work has culminated into a 3-1 start for the Warriors. Dowell ran for 205 yards and four touchdowns in White County’s 40-0 season-opening win against Livingston Academy, and he put together the best game of his young career in their week four win over Cookeville.

Dowell was unstoppable, rushing for 348 yards and two touchdowns in a 41-13 win over the Cavaliers. It was White County’s first win in the head-to-head series since 2013, and the biggest highlight of all was an electric 85-yard touchdown run from Dowell.

“It’s exciting for him, and exciting for the whole team,” Fraiser said. “He’ll be the first one to tell you that we had other guys run the ball well and the offensive line played well. He obviously deserves the credit he gets too. He’s just a spectacular athlete, and it was fulfilling for him to bust out and have a great game.”

What separates Dowell from your average athlete is the fact that even with a game like that, he’s looking for ways to be even better. Being great in one game isn’t enough for him, and nothing will keep him from getting back to work the next day, following a showing like the one he had against Cookeville.

Fraiser sees a bright future for his junior leader, and that work ethic is the main reason why.

“It blows my mind that people aren’t beating down the door to ask him to play for them,” Fraiser said. “The hard work and determination and work ethic, you hear that story a lot from people, but this is not normal. I’ve been around football a long time and I’ve seen a lot of good players with their head on straight, but I’ve never seen this kind of humbleness. It is exciting, I just hope it turns into good things in the future. You never know what’s in store, but you know it won’t be for lack of effort.”