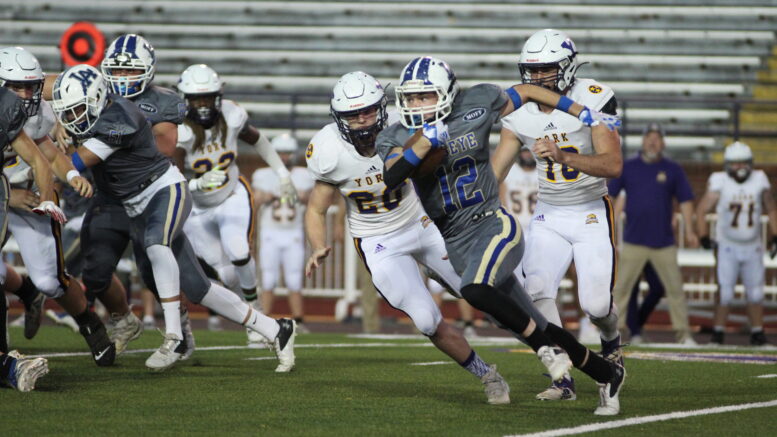 The Livingston Academy Wildcats lost their fourth consecutive game to open the season against York Institute last Thursday 35-18, but the score was fairly deceiving for anyone who didn’t watch.

The Wildcats showed improvements on defense, as they gave the offense multiple chances to cut into the Dragons’ lead in the second-half. The offense responded by putting up the most points they’ve put up all year thus far.

It wasn’t enough for a win, but it was enough to give head coach Dale Flatt confidence heading into week five.

Patience is one of the most important parts of Flatt’s job. With only three seniors and several younger players playing new positions, he says that the little victories are just as important as winning the games right now.

“You have to have those little victories before you get the big victory,” Flatt said. “Our kids are eager to do that. They try hard, and they don’t give up. A lot of teams might give up because they aren’t winning, and they aren’t. They keep getting out there and trying.”

Speaking of those seniors, Jaden Lawrence was one of the biggest bright spots for the Wildcats against York. He put up over 150 receiving yards and two touchdowns on offense, and he picked off a pass on defense to set the offense up for a scoring drive.

Flatt says that Lawrence’s play is a sign of improvement, not just from him, but also the offense as a whole.

“Jaden’s always been a good receiver,” Flatt said. “I think it has to do with the whole offensive unit; it doesn’t just fall on Jaden or Brodey (Coffee). The offensive line is holding up better, Brodey has been better about finding him and Jaden’s running routes better. Everything’s getting better.”

The Wildcats get back into region play this week, as they head to Lafayette to take on the Macon County Tigers. Because Livingston played on Thursday, Flatt had a chance to go scout the Tigers on Friday. As far as what he saw, he knows this game will be another tough test for his young squad, and they’ll have to limit their mistakes in order to win.

“They have a well-disciplined team,” Flatt said. “We do good things. At times, we show that we’re really good, and then we make a mistake and it really hurts us…Against Trousdale, you could tell that Macon County was doing what they wanted to do. They were moving the ball and they got stops on defense. They play well together, and there weren’t many mistakes out of them.”

The Wildcats and Tigers face off on Friday at 7 P.M. The game will be live-streamed on Upper Cumberland Reporter 4 on Facebook.