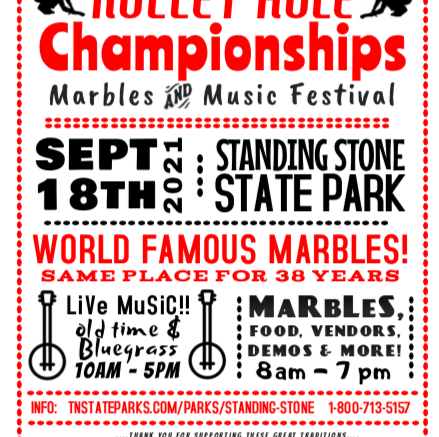 HILHAM – Building on a rich cultural tradition, Standing Stone State Park will host the National Rolley Hole Marbles Championship and Festival on Saturday, Sept. 18, drawing some of the country’s best players to Tennessee. Players will match skills in what is known as the “Super Bowl of Marbles.”

This will be the 38th annual event, all played at Standing Stone State Park. It is an all-day festival, where everyone can enjoy food, music, and marble games for all ages. The day will feature a Kids Marble Festival, marble making demonstrations, and a swap meet.

“This is the only event of its kind in the world,” Park Manager Christopher Cole said. “It is not only great for the park but for the community. We invite everyone to be here. This really is a special one-of a kind event.”

Standing Stone is the only state park in the nation with a marble yard, mainly because some of the best players hail from Tennessee’s Clay County. The championship is the most challenging marble tournament, where only the finest players compete.

Co-hosted by the Friends of Standing Stone State Park, the free festival will kick off at 8 a.m.

Rolley Hole is a folk game similar to croquet. It will be played by the rules of the National Rolley Hole Marbles Championship on a dirt yard which measures 40×25 feet. The strategy comes by determining the best way to keep opponents from making the hole, which often requires skillful hard shots against their marbles, sending them ricocheting across the yard.

“The setting is spectacular, and the talent line-up is top notch with a combination of great music artists, great marble making artists, and the world’s greatest marble players,” Cole said.

This event is widely regarded as one of the most effective public sector folklife projects on record in Tennessee. It has promoted a greater understanding and sustainability of cultural heritage, community heritage, and folklife across the region, state, and beyond.