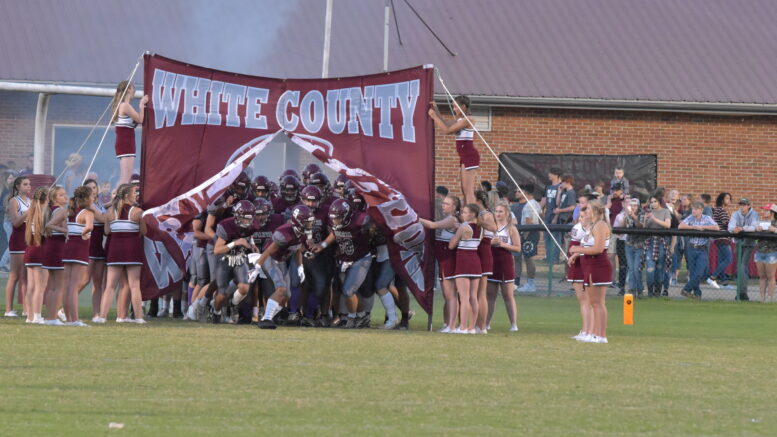 The White County Warriors are preparing to take on 2nd-ranked Mt. Juliet on Friday night in Sparta.

The Warriors (3-1, 0-1) are looking to build off momentum from their blowout win over Cookeville, but will face their toughest test yet in the form of the Golden Bears (4-0, 1-0).

The Warriors 41-13 win over Cookeville in week 4 was their first win over their rivals since 2013, but Frasier said his team has not been distracted in their preparation for Mt. Juliet.

“It’s been a good week,” said Frasier. “Cookeville was a big win, but it’s not a region game. They’ve come to work and I think they’ll be ready. It’s not been a problem with these guys, they’re a different kind of group. We’ll play hard.”

The Golden Bears have enjoyed a dominant start to the season. They are coming off a 38-20 win at Warren County. The MJHS offense is averaging 39.5 points per game while the defense is allowing 11.75. They are widely-regarded as a favorite to make a run towards a state championship.

Fraiser said his defense, which has been stout through four weeks, will have to be focused to slow down the explosive MJHS attack.

“This will be a bigger test for them,” said Frasier. “They throw it and run it well. They’ve got athletes outside. You’ve got to mix it up, so it’ll be a huge test for us. We’re going to give up some points. We’ve got to make them earn their touchdowns on long drives and limit big plays.”

The Warriors dropped their region opener in week 3 against Station Camp 14-10, Fraiser said getting their first win in the region is critical as they chase their goals of making the playoffs and winning a region title.

“If we don’t get through the next three weeks with a couple of wins, we’re out of the race,” said Frasier. “We know each one is important. We still want to win the region. Right now, we’re still in control so we’re going out and trying to win the game. I know it’s a tough hill to climb, but the next three weeks will determine whether this is just another season or if we can accomplish our goals.”

The matchup between the Warriors and the Golden Bears is the High School Football Game of the Week. It will be streamed live on the UCR Facebook page with pregame coverage starting at 6:50 p.m.