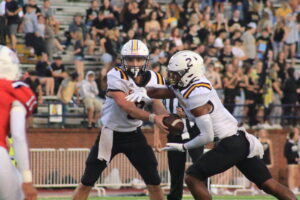 The Upperman Bees are looking to bounce back from their first loss of the 2021 football season as they prepare to return to region play against the Stone Memorial Panthers.

“They seem to play a couple of different styles,” said UHS head coach Adam Caine on the Panthers. “They’ve put close to 50 on the board and last week they won a defensive battle. That shows that they’re a competitive group and they’ve figured out ways to win. I’ve been impressed with them.”

The Panthers are averaging over 32 points per game and have won three straight games, including a 7-6 win over Monterey in week 4.

Caine said he has been impressed by quarterback Hunter Heavilon in head coach Derik Samber’s offense.

“He’s been lighting it up,” said Caine. “Through the air and running the football. Offensively it starts with the quarterback and they’ve got a couple of guys who can run the football pretty well. I know coach Samber’s got really good schemes and he’s been keeping me up at night this week figuring out exactly how I want to deal with them”

Caine said he knows they are running into a SMHS team that is playing well.

“They seem to be playing really well,” said Caine. “A three-game win streak and we’ve got nothing but respect for them. We know it’ll be a battle come Friday night.”

The Bees fell against Fayetteville 19-14 in week 4. Caine said he has been pleased with the response of his team after an emotional loss.

“I’ve been pleased with the response,” said Caine. “These kids want to be good and they want to win. Last week was disappointing on several fronts. I do feel like the officials played a pretty big role in it. I’m not referring to whether it was a correct or incorrect call, but dealing with the highs and lows of feeling like you scored and having that taken back. It was a little more difficult than a normal defeat. But we’re figuring out how to manage our emotions. The guys seem to understand what that means. It’s been a good week.”

Senior quarterback Ty Dutchess has enjoyed a strong start to the 2021 season, including over 200 total yards and two touchdowns against Fayetteville. Caine said he has been impressed by his quarterback, and as the Bees re-enter Region 4/4A play they will continue to need him to play well.

“He’s very capable,” said Caine. “I think we’re starting to see a little bit more consistency. He’s getting more comfortable. His decision making has gotten a lot better. There’s a lot of room for improvement. If he can continue to improve the sky’s the limit for what this team can do.”

Kickoff between the Bees and Panthers is set for 7 p.m. Friday night in Baxter. The game will be livestreamed on the Upper Cumberland Reporter 2 Facebook page with Michael Dodgen and Randy Wallace on the call.